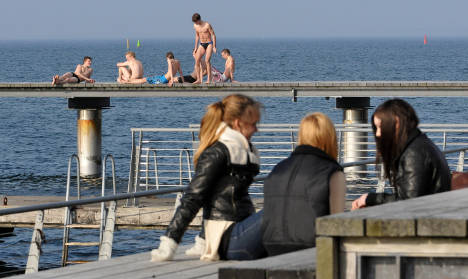 Southern Swedes enjoying a previous April warm spell in 2011. Photo: Johan Nilsson/TT
Sweden's south coast is cashing in on a heatwave sweeping through northern Europe, with temperatures of 18C recorded on Tuesday morning and even warmer weather possible later in the day.
Forecasters from Sweden's SMHI weather agency told Swedish daily Dagens Nyheter that the unusual weather was down to the same air mass also expected to bring highs of more than 20C to Berlin and at least 25C in Vienna.
However, meteorologists warned that the mini slice of summer was likely to fade quickly, with cooler temperatures and rain expected in the south off the country in the coming days.
Experts said that other parts of Sweden were also unlikely to join the sunny action, with highs of 11C expected in Stockholm and 10C in Gothenburg and towns and cities further north even less likely to reach double digits.
It is unusual for temperatures to peak so high in southern Sweden this early in the the year, although Genevad in Halland once experienced a record-breaking 29C in April 1993.
Meanwhile Sweden's geological agency SGU, which deals with issues relating to soil and water in the Nordic country, issued a warning earlier this week suggesting that too much dry weather in the coming weeks could cause concern for the region, after a lack of rain and snow over the winter.
“There is a risk that even some public water supplies could experience problems,” Bo Thunholm, a hydrogeologist for SGU told the TT news agency, adding that groundwater levels had not been so low in southeastern Sweden records began in the 1970s.
He explained that most people linked to the main water network were unlikely to be affected, but said that some homes in low-lying coastal areas that get their water supplies from shallow wells could experience problems.