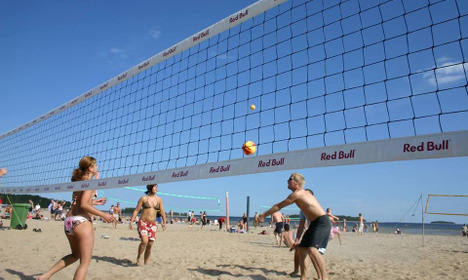 Around this time of year I’m often asked to write pieces on summer in Sweden. “Talk about the wonderful beaches of Skåne,” ask the media I freelance for. “And be sure to mention the amazing islands off western Sweden and Stockholm’s wonderful archipelago.”

“Certainly,” I answer. “And how about something on the incredible scenery of the High Coast in northern Sweden? And the deserted sandy beaches all along the eastern coast of northern Sweden. And how about the unspoilt wilderness of the far north.”
“No, it’s too cold up there,” they’ll reply. “Let’s just stick with the south. Maybe we’ll do something on the north for a winter special.”
This is no exaggeration. Even supposedly clued-up travel editors from major publications struggle to understand that northern Sweden is not dark and frigid 52 weeks a year, that this beautiful region of Europe has some very desirable summer destinations, even as far north as Lapland.
So, in an attempt to redress the balance, here are five reasons I think you really should visit northern Sweden in the summer.
1. The High Coast (Höga Kusten) The High Coast offers astonishing scenery. Photo: Hogakusten.com
Designated a world heritage site by Unesco in 2000, the High Coast is a spectacular upthrust of land from the usually flat northern Swedish coast. It has dozens of islands with little stugas dotted on tiny coves and beaches. The water is clear, the scenery ravishing and there are a number of very good restaurants within a 20-minute drive of the coast.
2. Pite Havsbad The north boasts hundreds of sandy beaches. Photo: Pite Havsbad Facebook
This family-friendly beach resort doesn’t need to bother courting publicity. It’s booked solid every year, largely by northern Swedish and Norwegian families, who are quite happy that this extremely well-appointed Mediterranean-style resort has no intention of spreading its fame any further south. There are also hundreds of other beaches dotted up and down the northern Swedish coastline, many of them carpeted in warm, white sand.
3. Storforsen The spectacular Storforsen rapids. Photo: Tobias Lindman, Flickr
Visit here in late May or early June to see one of Europe’s biggest rapids hurling meltwater down an 80m drop at a rate of nearly 900 cubic metres a second. The roaring falls, which can be approached by wooden walkboards, form part of a national park. Book a room at Hotell Storforsen at the base of the rapids for a real room with a view.
4. Kungsleden The hiking in the north provides views of extraordinary beauty. Photo: Mikko Lindstedt, Flickr
The 81km stretch of the vast Kungsleden hiking trail, between Saltoluokta and Kvikkjokk, takes four to five days to hike. It’s an astonishingly beautiful and peaceful route on the edge of Sarek national park – often cited as Western Europe’s last wilderness.
5. Any lake or river in the north My sister enjoying a dip in the lake at the bottom of our garden. Photo: Private
We live on the edge of a lake which, if it were in the UK, would be thronged year-round by tourists. We have access to a lovely sandy beach where the water is surprisingly warm from June onwards. There is even a swimming platform. That the beach is almost always deserted is due to the fact that there are just so many lake and river beaches in northern Sweden, there’s simply no need to share. Rent a local house for 2,000 kronor ($250) a week and doze away your days at a nearby beach. Heaven!