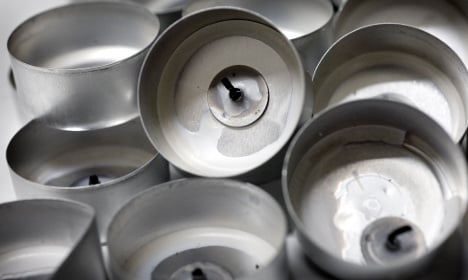 Archive picture not connected to the story. Photo: Claudio Bresciani/TT

Police were called to the father's home in the town of Karlsborg in October after his wife came home to find her husband dead. The couple's son, in his thirties, admitted to the murder in interrogations.

“I killed him. I wasn't in my right mind anyway,” he told officers, reported regional newspaper GP.

The son assaulted his father using the heavy tealight stone holder and stabbed him in the chest, according to Wednesday's verdict by Skaraborg District Court.

He then wrapped a dog leash around his father's neck before he stabbed himself in the chest and was taken to hospital.

A suicide letter, which the man himself referred to as a 'will', also formed part of the investigation.

Scribbled on pink post-it notes, the man thanked his mother in the letter and apologized for “everything stupid and mean I have said and done.” He wrote: “Love you all. I'm a better personality [sic] now.”

No motive was ever established by police or the court, but experts said the man suffered from psychotic symptoms with a distorted sense of reality, hallucinations and depression, according to the court verdict.

Witness statements suggested that the man had previously got on well with his father, but he is said to have told his mother earlier on the day of the murder that he had “entered into a pact with the devil”.

“We have questioned the family, neighbours and friends. We have questioned everyone you can. Nothing has emerged about any history of violence in the family or that there has been some kind of discord between father and son,” prosecutor Marianne Aldén previously told GP.

The man was sentenced on Tuesday to psychiatric care in a closed facility for offenders.