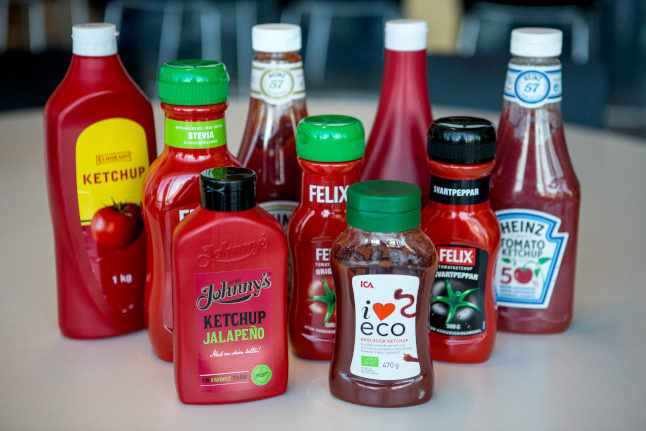 In the UK, where I'm from, pick'n'mix is associated with overpriced cinema snacks and long-extinct discount chain Woolworth's. It's not really a socially acceptable snack above the age of about eight and many parents worry about it being unhygienic or leading to costly dental care. But Swedish adults absolutely love their sweets, with a fondness for salt liquorice in particular, and pick'n'mix stands take pride of place in almost every supermarket and corner shop.

The pairing of pineapple and ham in a Hawaiian pizza is so polarizing in the US and UK that I don't know how they'd cope if they ever travelled to Sweden, where fruit and meat are regularly eaten together with reckless abandon. Lingonberry jam is a common accompaniment to meatballs, stews, and black pudding, while also finding its way onto pancakes, potatoes and toast. Another strange thing Swedes do with fruit is turn it into soup, especially rose hip or blueberry, which is served hot or cold, usually as a dessert or just a drink.

Jam and meat may be an odd combination but it pales in comparison to this utter sacrilege. Apparently making or opening a jar of sauce is just too taxing, so ketchup on pasta isn't just a late-night last resort for hungry college students, but is actually commonplace in many Swedish households and even served at some of the hot dog and burger stands around Stockholm. During my first Swedish class, the teacher's explanations of the difference between hard and soft 'k' sounds was repeatedly interrupted by a familiar tinkling tune coming from just outside the window. It sounded like an ice cream van, but at 7pm on a gloomy, freezing January evening it wasn't exactly ice cream weather – or so I thought. My teacher ended up diverting the lesson into a passionate discourse on Swedish food, including their love of ice cream in all weathers. Several corner shops have recently started displaying signs excitedly informing customers that their assortment of ice creams are back in stock, so it seems that as soon as the ice on the streets has thawed, it's acceptable to indulge in the frozen treats.

While in the UK a Friday night is often celebrated with drinks at the local pub, a curry with friends or a night on the town, the Swedes do things differently. More or less translating as 'cosy Friday', the idea of 'Fredagsmys' is a family evening at home with comfort food, first popularized by a series of commercials by a crisps manufacturer and now a national tradition. Families eat an easily prepared meal like pizza or tacos while watching TV.

In a country almost entirely surrounded by water and contains plenty of lakes, it's hardly a surprise that fish is a staple in the Swedish diet. But before moving here I didn't realize just deep the obsession runs. My language-learning app taught me how to say sill (pickled herring) surströmming (fermented herring) and kräfta (crayfish) before it had taught me how to ask 'how are you?' or to ask for directions, and that seems to sum up the place fish takes in Swedish life; apparently crayfish parties are a thing. You can even buy caviar in a tube. AKA every Thursday! This tradition supposedly comes from Sweden's distant Catholic past, when a filling meal was needed before the traditional fasting on Friday, and yellow pea soup followed by pancakes and jam is still the usual meal in many restaurants, Swedish schools, and in the national army.

8. Pastries that don't sound good on paper – but are

The bright green hue of Swedish prinsesstårta is not especially appetizing and yet the elaborate marzipan-topped layer cake is one of the most popular treats in Sweden. As its name suggests, it even has fans in the royal family and was originally created for the princesses. And while foreigners may associate cardamom with savoury Asian food, in the Nordic countries it's used in baking, and cardamom buns are surprisingly delicious.

Perhaps the most obvious difference between Swedish eating habits and those abroad is that Swedes eat out much less often, mainly because of the cost. As well as the UK, I've lived in Rome and Berlin, and in both cities it's easy to find a restaurant meal for under €10 – including wine. Not so in Sweden. With a much higher average wage, restaurants have to hike up their prices, so socializing often revolves around dinner at friends' houses more than eating out, with guests frequently asked to bring along dishes, ingredients and most definitely their own drinks.

For me, dining in feels very sophisticated and cosier than eating in a restaurant. But it must cause problems once your friendship group grows larger than the number of seats at your kitchen table.

This article was originally published in 2016.