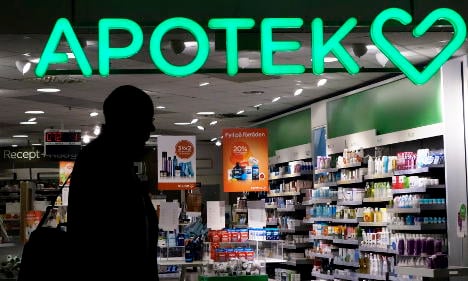 Patients seeking to access prescription drugs in Sweden ran into trouble when the electronic system that connects pharmacies around the country to doctors' databases stopped working.

Sweden has had e-prescriptions since 2000, replacing paper print-outs with technology that allows chemists to see which medicines they should hand over by typing in a customer's social security number.

However problems with the system were reported at 2.30pm on Tuesday and weren't fixed until almost 10pm.

“We will work with our technical provider to thoroughly analyze what happened and how it could happen,” Erika Burlin Hellman, a press spokesperson for Sweden's e-health authority (E-hälsomyndigheten), said in an interview with the TT news agency after the problems were resolved.

She said that emergency procedures had been in place during the shutdown so that patients who needed immediate access to prescription drugs could be given them manually following an “assessment by pharmacies”.

“We have gone over to using paper prescriptions and have been more generous (…) to those who need to start a treatment,” Åsa Hammar, chief doctor at Stockholm's Danderyd Hospital, told TT earlier in the evening.

Patients who did not instantly require their medication were advised to return to their nearest pharmacy on Wednesday.

Around nine million prescriptions a month are handed out to Swedish residents, of which 98 percent are e-prescriptions, according to E-hälsomyndigheten.