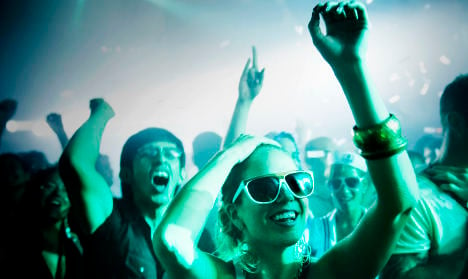 You know those quiet nights in the pub that end up like this? Photo: David Magnusson/SvD/TT
Swedes aren’t famous for being spontaneous: they take ‘fika’ (coffee and cake) breaks like clockwork, book all their summer holidays in the same month and have watched the same episode of Donald Duck on television at Christmas for decades.
But Swedish people also love to party and in the past that’s caused problems when customers in bars without special dance licences have decided to take a chance on showing off their moves in public.
If the owners of bars, clubs or restaurants lack a permit and their patrons start unexpectedly moving to music, they can be slapped with a fine.
Police have long argued that the permits are needed because they say dancing creates disorder, which in turn can lead to fights.
However Sweden’s Justice Committee is understood to have endorsed a motion put forward by Sweden’s Left Party campaigning against the policy, and this is expected to be voted through in parliament on April 14th.
“It is a completely united committee that has endorsed the motion, so any other outcome in parliament is not to be expected. It feels great,” Rosanna Dinamarca, a Left Party politician, told Swedish newspaper Dagens Nyheter (DN).
“It is somewhat absurd and at odds with modern society to have a system where the bar owner does not dare to play music that could encourage dancing and where people are forbidden to spontaneously burst into dance unless there is a special permit,” she argued.
Dinamarca added that it was also currently very difficult to distinguish between “dancing” and customers simply moving parts of their body to a beat.

What happens if this guy starts tapping his feet? Photo: Faramarz Gosheh/Image Bank Sweden
The expected change in the rules follows numerous previous campaigns to change the policy including a 1,000-strong street-dance demo against the regulation in 2012, led by Anders Varveus, a Swedish nightclub pioneer.
“I am pretty happy! I hope the information is correct and that the new law will pass in parliament,” he told The Local on Thursday.
“For many entrepreneurs in the mainstream scene it will be really good because its a normalization for the scene.”
The campaigner said that he planned to organize a not-so-spontaneous dance outside the Swedish parliament at 4pm on April 14th and “possibly some underground parties on the same night”.
Stockholm-based events organizer Kristian Hell told The Local that he was also thrilled to hear about the predicted shift.
“Is it legal to comment with a sequence of well thought out emoji’s?” joked the Australian, who is also a host at Trädgården superclub.
“This news to overturn the need for a dance licence will make a lot of people laugh and I think that’s just what we need as the summer club season is about to open,” he added.
However according to Hell, some police in the Swedish capital have already been more lenient than the current laws suggest.
“During my seven years in Stockholm and six years working within the scene, the authorities have been quite lenient and have always turned a blind eye. Nobody wants to be a party pooper. Everybody wins.”
A range of leading pubs and music venues in Sweden have also declared they are dancing with delight in anticipation of the parliamentary vote, including the Debaser chain and the Södra theatre bar on hipster island Södermalm.
According to Stockholm’s environment agency there are about 1,100 bars and restaurants in the Swedish capital alone. While the majority play some kind of music, only 100 currently have dance permits.