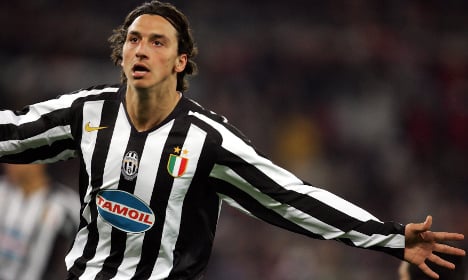 Ulf Karlsson, the former leader of the Swedish athletics team, made the controversial comments at a community event held by the Värmland Society of Sports History in Karlstad on Tuesday, but they did not grab headlines in Sweden until Thursday after they were written about by the NWT newspaper.

“Zlatan went up 10 kilos in six months at Juventus. I think he was doped. That's my opinion,” Karlsson was quoted by the regional daily as saying. When asked if he meant what he said, he replied: “Yes, I am convinced.”

Ibrahimovic, currently the star of France's Paris Saint-Germain, played for the Italian team from 2004-2006. He has never tested positive for doping.

The footballer's agent Mino Raiola told the Expressen tabloid on Thursday afternoon that the player would take legal action.

“This man has made a big mistake. He is going to have had one life before this statement and another life after it. He is spreading falsehoods,” said Raiola.

“It is ridiculous. There are no facts there. We can prove it is not true. All clubs where Zlatan has been know that he doesn't even take aspirin.”

It is not the first time a football team is the subject of accusations surrounding performance-enhancing substances and Karlsson said on Tuesday that anti-doping officials should focus more on team sports.

“They are more exempt from tests than individual athletes. Zlatan went up 10 kilos in muscles in six months at Juventus. It's impossible to do that in such a short time.”

“I think the culture was still there at Juventus at that time.”

Karlsson later told the Aftonbladet newspaper that he did not mean to make any accusations.

“It's not directed at Zlatan. What I'm saying is that nobody can go up 10 kilos in that time. We were talking about the situation at Juventus and Zlatan was mentioned because he is such a big icon.”

But the press officer of the Swedish Football Association slammed his comments.

“To say something like that without [having proof], that's to me very startling and surprising. I don't want to speculate or touch upon Karlsson's claim, but it sounds completely absurd to my ears. It's a very, very serious accusation,” Niklas Bodell told Expressen.