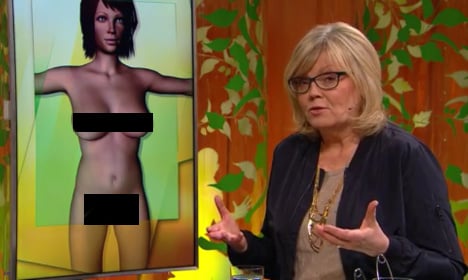 An screenshot of the Fråga Doktorn show. Photo: SVT

Public broadcaster SVT backtracked this week over a controversy sparked by its health show 'Fråga Doktorn' ('ask the doctor'), after it chose to illustrate a viewer's question about vitamin-B12 deficiency by showing an image of a woman without pubic hair but with really big breasts.

“What the heck does a nude female body with silicone implants and what looks like erect nipples and hairless sex which looked like that of a child, to do with B12 deficiency? Shame, SVT!” wrote one Swede who joined a chorus of angry viewers hitting out on Facebook after Monday's show.

The controversy followed two months after the show used an image of a male body to illustrate an inguinal hernia. But it was a different protusion entirely that captured readers' attention, who took to social media to blast his “27 centimetre long thing” as “completely unrealistic”. An screenshot of the Fråga Doktorn show. Photo: SVT

It got so bad that SVT apologized and promised never to use the same naked full-body images again.

“You are quite right in your criticism. We have not been happy with the graphics ourselves and have now made the decision to not use it for the next season. Hope that your confidence in us is not too tarnished and that you continue to watch the show,” wrote SVT in a Facebook statement.

Meanwhile SVT programme head Bengt Strömbro said that they had meant to use the images only to make the human anatomy clear to viewers and show where the different body parts are located.

“After the debate about the 3D animated pictures of a naked woman and a naked man, which some of our readers have found controversial, we have decided to use other pictures of full bodies in the future,” he told The Local.

“Our assessment is that they get in the way and take focus away from informing about medical conditions, which is the programme's core mission. The images are a small part of a larger 3D graphic package which shows the human anatomy broken down to organ level.”

The Local is unable to publish the uncensored versions of the pictures, but readers who want to investigate for themselves can find them here. Maybe best not to click on the link while at you're at work though!