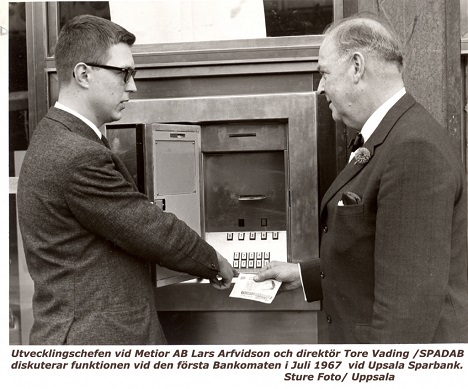 Swish. Klarna. Trustly. There are tons of Swedish financial tech inventions. But what you may not know is that it's a deep-rooted tradition of financial innovation which actually started last century! Sweden's first ATM, known as a bankomat in Swedish, opened in July 1967.

Upsala Sparbank was the first bank to offer the service, and with just a card and a personal code, suddenly customers could access their bank accounts 24 hours, seven days a week. It seemed ground-breaking, revolutionary – but really, the revolution was all thanks to that card and that code. And that was a Swedish technique developed three years earlier.

“We had developed a personal identification system, and it was from that system that we then built the ATM,” engineer Lars Arfvidson, who was director of development at the time in the part of Securitas which would later become the company Metior, told KTH magazine.

Within just a year, the ATM was popping up in Holland, Portugal, Denmark, Switzerland, Germany, and Israel. The Swedish ATM was not the first, however. Just one week earlier a similar product had been invented in the UK.

But it didn't last long – the Swedish technology worked better. The English version of the ATM didn't use a card, but rather a sort of radiocarbon check. Before customers could use the 'ATM' they had to receive hole-punch cards from the bank – one such check for each type of currency bill. When they had used those checks they had to go back and get new ones from the bank.

But the Swedish ATM worked – well, basically the same was as modern ATMs. Customers had special codes. Originally the system also used a hole-punch, but it was soon replaced by magnet strips, and later, the little chip which is used today.

It's similar with ATMs.

Although there have been changes, the principle has always been the same. It took a while to get the system online though – when the ATM was invented, all transactions had to be registered afterwards by hand.

“It was supposed to be online from the very beginning, but it took time,” says Arfvidson. “And at that time, there weren't even many banks which had computers.”

Since the original ATMs weren't connected to the internet, there were security issues and fraud could take place. The maximum withdrawal at an ATM was 500 kronor per day, but since ATMs weren't connected to each other, a customer could theoretically go to different ATMs and get 500 kronor from each. The information was registered only afterwards – at which time the card would be blocked if someone had withdrawn more than their account had.

But now, with everything connected and with secure microchips, it's much harder to cheat an ATM. The largest risk today is actually that a potential thief could use Swish on someone else's smartphone!

“But in Swish you can add your own limit, for example that you can't Swish more than 500 kronor per day,” says Niklas Arvidsson, who researchers the cashless society at KTH (the Royal Institute of Technology), in KTH Magazine. “So you have time to contact the bank and limit the damage.”

The first computer-connected ATM was launched in Malmö as early as 1968 – but users couldn't imagine how dependent we would become on our cards in the future.

And now, even cards are vanishing. With services like Swish and Klarna, Swedes don't need their cards as often – though they are still some of the biggest card users in the world.

Sweden has gone almost entirely cashless. Research from KTH shows that indeed, Sweden will be one of the first cash-free societies in the world. Some people estimate cash could be dead in five years.

In fact, cash transactions today represent no more than two percent of the value of all payments made in Sweden, according to the central bank (Riksbanken).

But until we're certain we don't need cash at all, ATMs will remain.

“The banks are trying to reduce cash use, but at the same time they need to automate a lot of services, which means ATMs are still useful for the moment,” Arvidsson says.

It's hard to know when exactly cash will become “useless”.  Sweden just issued new bills last year – the old ones had lasted 30 years – but maybe this will be the last round. Who knows?