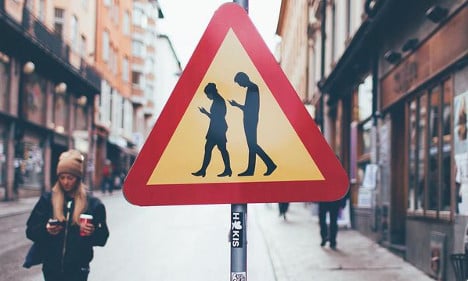 Showing a man and a woman locked to their smartphones, the sign, which first went viral after it was posted around the Swedish capital last year, was supposed to be an arty dig at tech-savvy locals.

But after a recent study highlighted that Stockholmers pose the greatest traffic danger risk in Europe thanks to their 'smombie' (smartphone + zombie, geddit?) habits, one of the sign's co-creators has revealed that the project had since ended up going global.

“I've been told that it's part of a Ted Talk, a school book, a tourist guide and a street art guide in Stockholm,” Jacob Sempler told The Local on Monday.

He said there were also actual replica signs being used for artistic purposes in Finland's capital Helsinki as well as the Russian cities of St Petersburg and Murmansk.

If you're in Murmansk looking for Swedish art, look no further. pic.twitter.com/2XpjsKeUeH

“Oh, and Frankfurt city just reached out to us. In New Jersey, they just proposed a fine for walking and texting. That might be a little too extreme, even by my standards,” he added.

The advertising creative has previously admitted that he came up with the concept, which he worked on with co-creator Emil Tiismann after realising he had become a smombie himself.

“One day on my way to work I was almost run over because I was staring at my phone like a sick person. It hit me then that I'm not the only one with this behaviour and that it ought to be addressed somehow,” he said in November.

Last week's smombie table was put together by German research group Dekra and suggested that almost a quarter of Stockholmers analysed for the study appeared to be distracted by their phones while crossing through traffic.

Sempler, who also recently hit the headlines thanks to his agency's 'Trump Donald Trump' game said on Monday that he hoped The Local's readers weren't so hooked to their mobiles reading about his projects that they were putting themselves in danger.

“I know that getting hit by a texting distracted driver while reading this article on your smartphone walking down the street would be an ironic way to die,” he said.