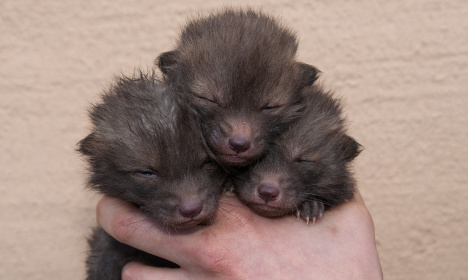 They are tiny, furry and super cute. And the young fox siblings, who were found shivering inside a culvert in Solna north of Stockholm four days ago, are now enjoying life again after a rough start.

When their mother did not turn up, police handed them over to zoo keepers at the Skansen Aquarium in Stockholm.

““They had to arrest the little foxes, for vagrancy or something, and then they came to us after the police had made sure that they would not be turned into food for our crocodiles,” a laughing Emma Karlsson told the TT newswire.

She is currently looking after the trio – a girl and her two brothers – at her apartment in Stockholm's Södermalm district. But it is not as enviable a task as it may seem when you look at the adorable pictures of the little animals. They have to be fed every four hours, usually followed by a bath.

“It gets pretty messy when you feed them, I haven't really found a good way of doing that yet. There's three of them who have to share the same bowl and they are a bit unsteady,” she said.

“But they are fairly easy to care for otherwise, you hear when they want food.” The fox cubs, who are believed to be around three weeks old, are soon set to leave the apartment for the Kungsbyn zoo in Västerås which has agreed to take them in.

“It feels okay. They are really cute but it will be a relief to go back to my normal life,” said Karlsson.