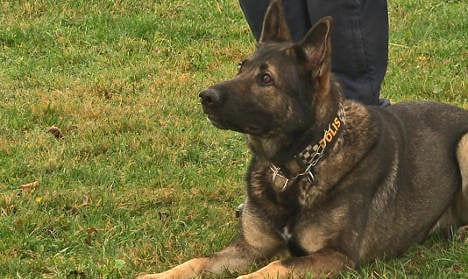 Aldo pictured in 2013. Photo: Erland Vinbergt/TT
Aldo, who was voted the top police dog in Sweden in 2013 for contributing to nearly 60 arrests, was given an unusual goodbye by some of his colleagues in southern Sweden earlier this week.
They gathered to salute the animal on Monday while he was taken for a final stroll by one of his handlers. Then, a procession of police cars and motorbikes drove through the city in convoy in his honour as he was taken to a veterinary clinic to be put down, following months of painful back problems.
However after photos of the tribute spread on social media, the initiative created a backlash, as some commentators argued that the event was a misuse of public money or that police officers should have been focused on chasing criminals instead.
One Twitter user posted a link to a photo of the procession with the comment: “Today police recieved 250 million kronor to 'cope with the border controls'. Meanwhile at the police station…”

However others appeared touched by the initiative.
“It's the least you could do for a colleague that would sacrifice their life for you if necessary,” wrote Jonas Persson on regional newspaper Sydsvenskan's Facebook page.
Dog lover Ingela Grahn posted: “Anyone who is writing spiteful comments has never had the pleasure of knowing and working with an animal.”
Local police chief Erik Jansåker responded to the criticism on Tuesday afternoon, arguing that the ceremony had taken a “very short time” and noting that many of the police officers who had attended had done so during their leisure time.
“There has not been a charge to the taxpayer. It was a gesture in this particular case and all things considered I think it was quite reasonable,” he told he TT news agency.
As The Local reported last October, Sweden's most recent winning police dog is named Herman. He scooped the 2015 award for his work sniffing out more than 30 kilos of drugs and a dozen weapons as well as saving a missing toddler.