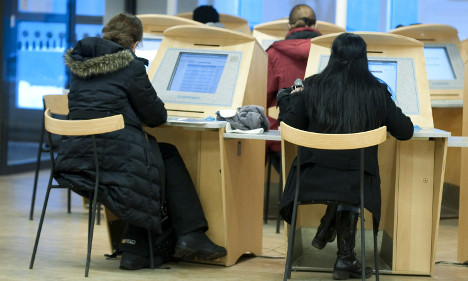 A Swedish employment agency office. Photo: Bertil Ericsson/TT
Just 4.7 percent of people born in Sweden were out of a job last month, compared to 21.4 percent of the country's foreign-born population.
Or to put it another way, Sweden's overall jobless rate has nudged up slightly to 7.8 percent (compared with 7.6 percent last month), but half of that figure is made up of residents who were born abroad.
The latest figures come amid ongoing concerns about integration in the Nordic country, which has taken in record numbers of immigrants and asylum seekers in recent years.
“I am concerned that the government is blind to the great challenges of integration that we have and it is not presenting a policy to meet them,” said Elisabeth Svantesson, a spokesperson for the opposition centre-right Moderates party in response to the statistics.
She argued that in order for Sweden's economy to remain strong, more efforts were needed to boost the number of foreigners in the labour market.
“It is worrying. And then one should also remember that those who came last year are not even registered as unemployed yet, so the challenge will be even greater in the future.”
READ ALSO: Six in ten jobless will be foreign-born by 2017
Sweden's ruling Social Democrat-Green coalition has invested in a number of initiatives designed to help immigrants get jobs in the Nordic country, including state-subsidized internships and short-term contracts to help employers taking on foreign staff members. The country also offers free Swedish for Immigrants classes for all newcomers, although these are only available once they have secured residency.
However many critics argue that Sweden's collectively-agreed entry-level wages for some professions are too high, and the Scandinavian country should offer a more British-style approach in order to help more people into work, with lower salaries combined with tax breaks.
Sweden's Finance Minister Magdalena Andersson has so far ruled out the idea.
The country's employment agency, Arbetsförmedlingen recently predicted that 60 percent of unemployed people in Sweden would have foreign backgrounds by 2017.