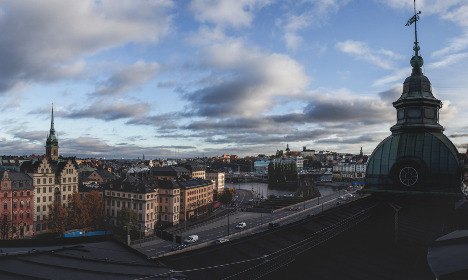 Is Stockholm under a dark cloud? Photo: Tuukka Ervasti/Image Bank Sweden
The two Swedish entrepreneurs, who started the world's biggest streaming company in 2006, write that it was their dream to demonstrate that Sweden could compete on the global stage, but they are growing increasingly concerned that a number of challenges in the Nordic nation are limiting their success.
“We are now therefore forced to state that if no changes are made, we must consider growing more in other countries instead of Sweden,” they say in the letter, written in Swedish.
The pair pay special attention to the housing market in Stockholm, where property prices have shot up in recent years, while a divided rental market means that those without queuing points in the city's housing queue often have to take short, second-hand contracts at inflated prices.
“Our success is entirely dependent on being able to attract the best talent from around the world,” they write, noting that thet have “repeatedly pointed out” the lack of access to affordable rental properties in the capital.
“We have in recent years had lots of contact with politicians from the Stockholm City Council, the parliament and the government. The response has been positive but at the same time no real changes have occurred. For a company like ours to grow further in Sweden, things must change quickly.”
The letter singles out New York, Singapore and London as global cities which offer simpler and more flexible housing solutions. Apartments in a Swedish suburb. Photo: Ann Sofi Rosenk/Image Bank Sweden
READ ALSO: Stockholm housing queue could get world record
Elsewhere in their statement, the entrepreneurs also argue that Sweden needs to do more to train programmers from a younger age and to work harder to encourage more girls to consider careers in tech.
Sweden must also be able to “offer competitive salaries, generous benefits and stock options” for staff, allowing some of the brightest talents to become part-owners in emerging business, they say.
In the Nordic nation, income from stock options is currently counted as income from employment and is therefore taxed at 70 percent. By contrast tax rates are between 15 and 20 percent in the US and 25 percent in Germany, the letter explains.
“Success requires that you are constantly changing and taking action instantly. Those who do not get overtaken,” the duo argue.
Spotify announced last month that it had reached 30 million paying subscribers and that it was planning to keep expanding into other nations. The company is estimated to be worth $8 billion. Spotify's Daniel Ek. Photo: Spotify/TT
Ek and Lorentzon's strongly-worded article, published on the site Medium, comes amid strong, ongoing debates in Sweden about all three core issues raised by Spotify's founders, with the accommodation shortage taking centre stage.
Last year German startup CupoNation told The Local that the Stockholm housing crisis had forced it to ditch plans to set up an office in Stockholm after it failed to find homes for its employees.
Sweden’s current Social Democrat-Green coalition recently promised to set aside 5.5 billion kronor ($665m) for various housing projects across the country in what Finance Minister Magdalena Andersson described as the “biggest housing political investment in 20 years in Sweden”.

Stockholm's business community also appears to be pulling together to try and ease the crisis, with a focus on helping foreigners to find accommodation.

Julika Lamberth, Business Development Manager for Stockholm Business Region, a state-funded company working to increase investment in the city, told The Local last year that the organization was stepping up efforts to link tech firms with local municipalties and real estate companies in the area.

A number of privately-funded co-living projects are also being planned for the Swedish capital including Tech Farm, which is seeking to create around 100 micro-apartments alongside shared living spaces for global entrepreneurs, developers and designers.