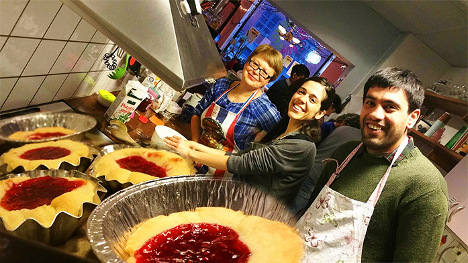 The sweet smell of vanilla is in the air at the Dynamo café near Skanstull in Stockholm. On a brisk evening earlier this year, a group of people gathered to put on aprons and get their hands dirty mixing and kneading a diverse set of ingredients into tasty treats.

“It's a fantastic chance to create friendships between people from different countries, improve your Swedish, and learn new recipes. You basically learn many things at the same time,” says Navid Kamyab, 31, from Iran. Navid is one of several people who turned up this evening to participate in a project known as ‘Bake with Love’ (Baka Med Kärlek), which gives him and others a chance to meet new people and learn new things.

The project, which is designed to build bridges between different people and promote values of respect, tolerance, and friendship. No special skills are required to join up – simply a desire to “make a difference”.

“We want to offer fun and easy projects that make a difference and that everyone can get involved in,” says Hebbah Elgindy, one of the project’s organizers.

The baking project is run through an organization known as Våga Hjälpa (‘Dare to help’), which was founded by Hebbah and Tanya Syed back in 2014. Realizing that one of the biggest integration challenges for newcomers in Sweden is creating social networks, the two hoped to promote social engagement between newcomers and established Swedes by organizing fun and creative activities centered around baking cookies and building meaningful relationships.

“It’s a place that helps people finding dedication and joy in their everyday lives,” Tanya adds.

“It’s a very cool event where I got to learn more about baking. Although I have beginner's Swedish, it’s also a good exercise for learning more Swedish and meeting new friends,” says Chellen, a biomedical researcher from Hong Kong who also participated in the recent baking session. The amateur bakers to a break to practice their Swedish. Photo: Våga Hjälpa

“I’ve seen participants join the café barely speaking a word of Swedish and at the end of the event speaking almost fluent Swedish. This happens every time and it's very inspiring!” she says.

“I’m also amazed by how new friendships are formed. I even overheard some people inviting each other over for the summer holidays.” Våga Hjälpa now runs several Bake With Love projects in Stockholm and has also launched in Örebro in central Sweden.

As a result, the group is always on the lookout for more volunteers who are also looking to establish new connections and enjoy some vanilla hearts along the way.

“Many participants actually join our organization afterwards as volunteers. It's a simple concept that has proven to be very successful since the start,” adds Tanya.