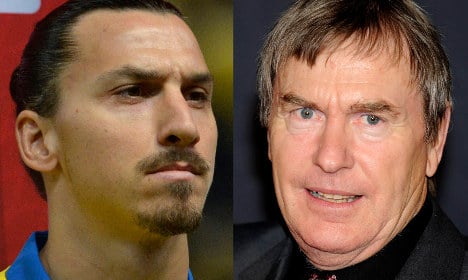 Ulf Karlsson, former leader of the Swedish athletics team, made the comments at the heart of the lawsuit at a panel debate organized in Karlstad in the north-western Värmland region last week.

“Zlatan went up 10 kilos in six months at Juventus. I think he was doped. That's my opinion,” regional newspaper NWT quoted him as saying.

He later backtracked on the claims, but on Monday Ibrahimovic's legal representatives handed in a gross defamation lawsuit ('grovt förtal' in Swedish) to Värmland District Court.

“Ulf Karlsson's statements are untrue, baseless and very serious for Ibrahimovic as an individual and an athlete, as well as in relation to his sponsors and partners. Therefore, the statements must be addressed,” wrote his lawyer Fredrik Bogren in an email to the Dagens Nyheter (DN) newspaper.

Karlsson apologized for his controversial statement after it grabbed global headlines when The Local first wrote about it in English last week.

“During the debate I expressed myself both unclearly and unfortunately about Zlatan Ibrahimovic. I understand now, in retrospect, that what I said could be interpreted as pointing the finger and that is deeply regrettable. That was not my intention at all,” he wrote in a letter sent to the TT newswire on Friday.

“I therefore wish to apologize to Zlatan and others who may have taken offence at my insinuating statements,” he continued.

Ibrahimovic, currently the star of France's Paris Saint-Germain, played for Juventus in Italy from 2004-2006. He has never tested positive for doping.

The footballer's agent Mino Raiola hit out at the rumours last week, telling the Expressen tabloid: “It is ridiculous. There are no facts there. We can prove it is not true. All clubs where Zlatan has been know that he doesn't even take aspirin.”

Another Swede, Hamburger SV's Albin Ekdal, who played for Juventus 2008-2010 and was also mentioned by Karlsson at the Karlstad event, said he would not press charges.

“There are no such plans. We discussed this on Thursday and Albin was of the view that he would rather focus on Hamburg and the national team,” his agent Martin Klette told DN.

He did not respond to Swedish media's requests for comments on Monday.