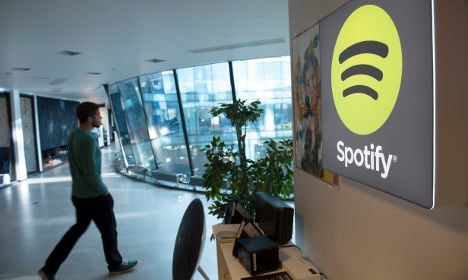 Spotify's office in Stockholm. Photo: Fredrik Sandberg/TT
Hundreds of Swedish and international workers with a foothold in Stockholm's startup scene are planning to demonstrate outside the Riksdag building next month as concerns grow that Sweden's capital is struggling to provide enough beds for global talent.
The initiative was announced in response to an open letter penned by the founders of Sweden's Spotify on Tuesday, arguing that if housing, tax and education policies did not evolve, they and other entrepreneurs would be forced to grow their businesses in other cities instead.
“After many polite meetings and a more recent Startup Manifesto, there doesn't seem to be much hope of change on the horizon,” says the Facebook invitation to the protest, which is being organised by the Sthlm Tech Meetup group, led by US entrepreneur Tyler Crowley.
He told The Local that he hoped the demonstration would make global headlines.
“The meetings are in private; this is an opportunity to do something more visual and it creates more of a sense of urgency,” he said.
“Spotify's letter is not a threat, they are making a statement on behalf of every startup in our eco system. We are the future of the economy. Spotify is the poster child.”
Almost 400 entrepreneurs had already expressed their interest in attending the protest by Wednesday lunchtime.
The event is set to take place on May 11th between 10am and 11am.
READ ALSO: How to navigate Sweden's crazy rental market
Sweden’s current Social Democrat-Green coalition has recently promised to set aside 5.5 billion kronor ($665m) for various housing projects across the country in what Finance Minister Magdalena Andersson described as the “biggest housing political investment in 20 years in Sweden”.
However critics argue that a complex rental market which requires residents to wait for years to get their hands on price-controlled properties will continue to have a strong negative impact on immigrants and foreign entrepreneurs working in Sweden. As well as missing out on the 'queuing points' racked up by locals during their teenage years in order to get their own rentals when they leave home, newcomers often lack the connections to find reasonably priced sublets or flat shares.
Last year German startup CupoNation told The Local that the Stockholm housing crisis had forced it to ditch plans to set up an office in Stockholm after it failed to find homes for its employees.
Crowley said he also knew of plenty of other young businesses in the UK and US that would like to move to the Swedish capital, following months of buzz about the startup scene, but had decided against it due to the housing crisis.
“The rent control issue is going to determine whether or not the city can be the best it can be, or whether we all move to Berlin,” he argued.
“Everyone is getting excited about wanting to come and join our amazing city but they can't. They [the politicians] are limiting growth.”
Crowley also said that he strongly agreed with Spotify's call for Sweden to allow employees to be given stock options in companies.
“It feels like the most Swedish thing of all, to share and collaborate (…) So I don't f**ing get it. Stock options are the life blood of innovation in America.”