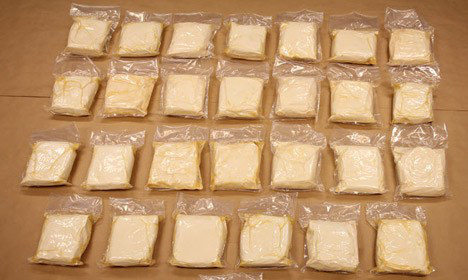 Confiscated amphetamines. Photo: Tolldirektoratet
Several hundred kilogrammes of drugs were found in the Sweden-registered van that crossed into south east Norway at the end of last year, Norwegian officials have revealed.
The Directorate of Norwegian Customs said that the discovery was the largest ever drug confiscation made in the county of Hedmark and took place after the van crossed into Norway, entering the town of Kongsvinger on November 28th.
Suspicions were raised after the vehicle crossed the border within two minutes of another rental van with Swedish number plates, arousing suspicion. Confiscated amphetamines. Photo: Tolldirektoratet
A customs patrol from Kongsvinger asked the drivers of both vans to pull over and staff found a total of 311 kilogrammes of marijuana, amphetamines and pills inside one of the vans.
“The people had a poor excuse for why they were in the area. We therefore searched the cardboard boxes that were in the back of the vehicle. It was discovered that the boxes contained large amounts of narcotics,” Kongsvinger customs agent Kjerst Bråthen told broadcaster NRK.
“We have never seen anything that big,” she added.
Norwegian customs officials released photos of their record find, showing thousands of bagged-up pills, wrapped hash blocks and dried cannabis leaves.
Four people were arrested after the heist and the case is now being handled by Oslo police.