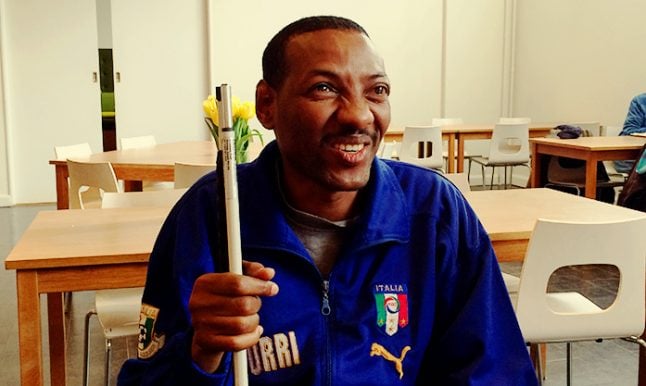 Gamei Nalouta may have lost his sight, but he hasn't lost sight of his dreams. Photo: The Local

Gamei may not be able to see, but anyone who looks at him can see he’s a happy man with a smile that never leaves his face.

Originally from Darfur in western Sudan, the 36-year-old fled to Egypt in 2012 after completing his studies in Khartoum.

Political tensions were high at the time in the aftermath of the 2011 independence of the Republic of South Sudan. Gamei found himself swept up in discussions about Sudan, social justice, and democracy.

Gamei soon discovered his political convictions came with a price.

“I was arrested at the university, and driven to an unknown location and held for three weeks,” he recalls.

After being freed he was warned not to continue with his political activities, and suffered continual harassment and persecution.

‘A matter of life and death’

At the same time, Gamei was adjusting to life without his eyesight.

“I’d been partially blind since the beginning of the 2000, due to retinal detachment and cataracts,” he explains. Surgery in 2010 didn’t help, and a couple of months after the operation, Gamei lost his vision completely.

Gamei’s calmness in talking about the loss of his eyesight is striking. There is no anger or frustration in his voice, and he seems to have taken the whole thing in stride. Perhaps that’s because he’d been preparing, reading about and meeting blind people before his own eyes stopped working.

“When I lost my sight, I felt normal. Sure, it was hard at first. I couldn`t move easily and freely; but at the end I got used to it.”

Blind or not, Gamei knew when he finished university he would have to leave Sudan, ultimately making the journey to Egypt in 2012 to escape further persecution.

“My situation in Sudan was a matter of life and death. I was harassed and threatened several times because of my opinions,” he says.

Soon after arriving in Egypt in March 2012, Gamei was granted status as a political refugee. But life in Egypt remained difficult, so Gamei continued to press his case with United Nations officials in Cairo, eventually convincing them that he should be resettled to a more secure country.

“They didn’t even tell me which country I am going to move to,” he recalls.

But in September 2013 – nine months after arriving in Egypt – that Gamei learned he’d been granted a Swedish residence permit.

But it would take two more years before he finally arrived in Sweden.

Well, as Gamei understands things, the wait due in part to a common challenge for people moving to Sweden: finding housing.

“They told me I needed to wait until they could assure proper accommodation for me,” he explains with a smile.

Gamei arrived in Sweden and found himself in a place vastly different from Cairo: Härnösand, a town of fewer than 20,000 residents nestled halfway up Sweden’s east coast.

It was a difficult transition.

“I started school, but soon began to feel depressed,” he recalls. “When I went out to buy food, I could rarely find another human being that I could ask for directions.

“It was during those moments I felt my weakness, my disability. It was very hard for me.”

But rather than continue feeling weak, Gamei instead took matters into his own hands.

He traveled to Stockholm, found a place to live, and starting building a new life in Sweden.

Gamei at a Stockholm cafe with his laptop. Photo: The Local
‘I want to work’

These days, Gamei is studying Swedish at SFI – and in other places.

“I’ve studied Swedish on my own for the last 6 months,” he says. “I’ve used YouTube a lot, there are lots of lessons in Swedish with Arabic translation.”

And as his Swedish improves, Gamei’s desire to get to work grows ever stronger.

“I want to work; I have a great will to work. I can’t see myself being in need and living on state welfare benefits,” he explains.

And like many Stockholmers, Gamei is on the hunt for new accommodation after learning recently from his landlord that his current second-hand lease will terminate at end at the end of the month.

“The most beautiful thing in this country is the security, I feel so secure,” he says.

He remains baffled as to why some young newcomers don’t seem to be motivated to build new lives in their adopted country and instead “waste time in cafes” without bothering to learn Swedish.

“Swedes deserve our respect whatever your religion or ethnicity are. If you come to a new community, you need to try to comprehend it, any society has pros and cons, but you shouldn’t isolate yourself either,” he says.

“We need to live within the community, learn the language, work, and produce – otherwise we won’t be among the Swedes, and truly be a part of them.”

Connect with Gamei via Facebook (Note: pages are in Arabic)