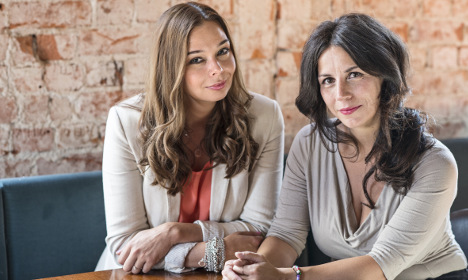 “So you're from Gothenburg, but where are you really from?” The Local's readers often tell us that they have at one point or other found it difficult to break into Swedish society, and even after they have, some haven't quite been able to shake off the image as 'the foreigner' – always looking different, sounding different.

The debate was brought to a head as Sweden took in a record number of people seeking asylum in the country last year. We spoke to political scientists Lejla Hastor, 33, and Nivin Yosef, 34, who hope to influence the discussion and fight prejudices by publishing an anthology written by immigrant women.

They were born in Bosnia-Herzegovina and Syria and came to Sweden when they were ten and six years old, respectively. In 'Sverige, en (o)besvarad kärlekshistoria' ('Sweden, an unrequited love story'), they have collected stories about the struggle to fit in, the search for your own identity and finding your path in life. The anthology, which is written in Swedish. Photo: Wahlström & Widstrand

Why did you decide to write this anthology?

Hastor: We wanted to show what it's like to grow up in Sweden when you're from a different country – not as an outsider, but as part of a kind of 'betweenship' between your background and your Swedish identity – how Sweden looks at us and how we look at it.

You use the word 'betweenship'. What does that mean?

Yosef: We have wanted to avoid using jargon or terminology in the book, but this is one concept that we refer to. It's about not belonging to one single place, but rather to two or more countries, cultures, identities, whatever you want to call it. Some view it as a state of in-between, and hence not belonging to anything, sometimes feeling alone and out of context wherever you are – while others view it as being a little everywhere, always.

Yosef: I think in general it is something desirable, a strength, it means several perspectives and takes on things. It gives you the possibility of always thinking and acting outside the so-called box, sometimes because of other expectations.

You've each written your own chapters for the anthology. What are your stories?

Yosef: My story is the relationship between your new life and your history, how the bond to your home and your parents affects where you belong. It's hard to completely distance yourself from that.

“To me the worst part is not the skinheads or the Sweden Democrats, the visible racism. It's the silent racism. That between neighbours, between those who are at the bottom of social hierarchy and those who are not even admitted: the immigrants.” – Nivin Yosef, Sverige en (o)besvarad kärlekshistoria

Hastor: It felt natural to start from ourselves. I shared my first memory of when we arrived in Sweden, which became the start of a long journey.

“I stepped into a Swedish class, into a Swedish school, and for the first time in my life I felt alone. While the other kids were watching TV shows, I was watching the news to see glimpses of what happened to my family in Bosnia. While the other kids were listening to music, I was listening to foreign radio stations reading the names of the people who had died in my hometown.” – Lejla Hastor, Sverige en (o)besvarad kärlekshistoria There's a wide range of stories, both sad and funny. How did you select them?

Hastor: We started by reaching out to women within our network and asked them to write about what felt most relevant to them regarding their relationship to Sweden. Some have chosen to take a humouristic approach to their stories while others have chosen to talk about deeper subjects, such as racism and exclusion. The book did become a bit heavier than we anticipated, and there are some sad elements, but almost all of the stories contain both positive and negative aspects. Most of these stories show that it can be difficult to break into Swedish society.

Hastor: They are all women writers because we want to contribute to the historical narrative in which women have tended to be marginalized. The 'immigrant woman' is usually presented as either a victim oppressed by her conservative family or a success story of someone who has managed to rise above her background. We are much more than that, and for many of us our background has been a strength.

Yosef: Exactly. We're not one homogenous group, most of us have one thing in common: we are women from other countries than Sweden. Imagine the variety. We have tried to illustrate that in this book.

Many of the stories touch upon integration and feeling like an outsider. How can Sweden get better at helping people integrate?

Yosef: We've used the book to try to reason about various ideas. One common factor is that in society it is not positive to stand out – but all those who write do stand out. We have experienced and talked a lot about immigration in Sweden for at least the past 30 years. It is time we better diversify and represent the pluralism there is, rather than keeping to the few stereotypes.

Hastor: In Sweden we have this image of ourselves that we're the best at everything. It tends to make us blind, we don't see the competence that people from other countries could offer.

But if you've come here as a refugee, it must be difficult to feel like you are 'allowed' to criticize Sweden?

Hastor: That really is a recurring theme in the anthology. A lot of people feel a huge sense of gratitude for everything they have been given, but when is it enough? When have we paid the debt and when can Sweden start being grateful for the fact that they have us?

Yosef: I've been here for 28 years, I have been grateful long enough, but I don't even know who I am supposed to feel grateful towards? Some kind of authority, organization, government agency? Who?

Immigration is becoming an increasingly thorny topic in Sweden, what are your thoughts on that?

Hastor: We think it's incredibly sad that the debate has become so polarized. But we hope that this book will contribute to a positive discussion.