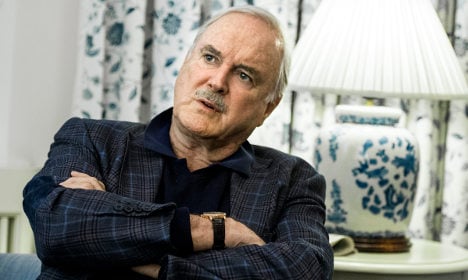 Cleese was horrified by his Swedish hotel experience. Photo: TT

The comedian is famous for playing Basil Fawlty, the irascible and incompetent hotelier who made life hell for the guests of his Torquay hotel..

Cleese's character's famously thrashed his broken-down car with a branch in one episode of the 1970s comedy classic – and now he's given a Swedish hotel something of an online drubbing.

The comedian aimed a number of sarcastic tweets at up-market chain Elite Hotels, after staying in one of its branches in the city of Linköping.

Cleese then posted: “In marked contrast to Linköping. Here's the view into the corridor from my room.”

The attached picture showed tins of paint and sheets on the floor.

In marked contrast to @elitehotels Linkoping. Here's the view into the corridor from my room. pic.twitter.com/P1N8YIx6CI

But the comic wasn't finished.

“It's not a hotel. It's a construction site with optional accommodation,” he wrote.

It's not a hotel. It's a construction site with optional accommodation. pic.twitter.com/yKzSTwiRUl

Cleese then finished: “Quite a nice shower, but no soap dish. How's this possible? Were they distracted by other important work?”

Cleese, who was also one of the Monty Python team, is currently touring Europe with his 'Last Time to See Me Before I Die' show, where he shares anecdotes and screens clips from his illustrious comedy career.