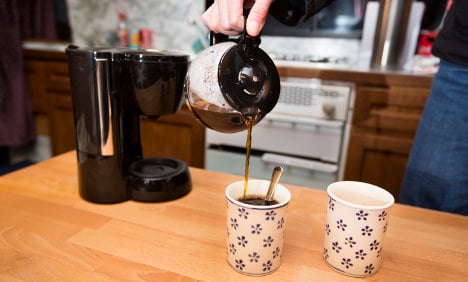 File picture of a coffee break. Photo: Per Groth/TT

Swedish officers say the pensioner disappeared from her home some time between 10am and 3pm on Saturday, prompting an online police appeal.

Their missing person notice reported that the woman was wearing a beige jacket and black trousers and was carrying a small blue bag when on the day that she left her home. It stated that she was born in 1937, was around 150cm tall with a slender build and had light brown hair.

In addition, the notice explained that the woman has dementia and can appear confused. However it also said that she was “no stranger to public transport”.

Swedish charity Missing People was contacted to help assist with the search the following day, but before volunteers could swing into action police called off their investigation.

“We received several tips on Sunday that the woman had been seen on a train heading towards Denmark,” Calle Persson, a police spokesperson, told Swedish tabloid Expressen.

He said that one of the callers identified that the pensioner spoke French and had asked if women were allowed to sit wherever they wanted on the train.

Later that evening, one of the missing Swedish resident's own relatives rang police to say that she had made it to the Belgian capital and had managed to meet up with friends there.

“She told me that she had gone to her friends' to drink coffee,” explained Persson.

The police spokesperson added that the woman had previously been based in Brussels and had only been living in the Näsby area of Kristianstad for a few months.

“We knew that she had taken cash and a Belgian ID card with her when she left. But I do not know if she even had a passport with her.”

Police have now closed the case.

The story bears some similarity to the 2009 Swedish book and subsequent feature film The One Hundred Year Old Man who Climbed Out the Window and Disappeared. In the fictional novel, by Jonas Jonasson, pensioner Allan Karlsson escapes his retirement home to get on a bus, but ends up participating in a series of unlikely adventures.