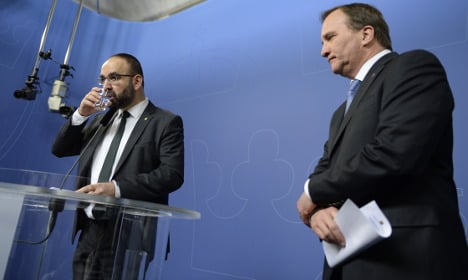 Stefan Löfven told a press conference in Stockholm on Monday that his minister for housing, urban development and information technology would be leaving his position on the government.

“I have received Mehmet Kaplan's resignation request and I have approved it,” said the Prime Minister.

“I've come to know Mehmet Kaplan as a man of humanistic and democratic values, but a minister should be able to represent Sweden in an unquestionable way.”

The press conference comes on the back of a week of controversies, which has seen Kaplan accused of being too closely affiliated with members of radical organizations. Speaking after Löfven, he rejected those claims.

“I have always worked against extremism of all kinds,” he told reporters, but said he had chosen to resign because his position as minister had become “untenable” following the past week's media storm.

#Kaplan – “Let me be clear: This is not a confirmation of those accusations against me that I consider to be false.”https://t.co/Ez2CLBuy25

The Svenska Dagbladet newspaper reported on Sunday that Kaplan, a member of the centre-left government's junior partner the Green Party, told a seminar in 2009 that “Israelis today treat Palestinians in a very similar way to how Jews were treated in Germany in the 1930s”.

News of the comments was immediately met with a wave of heavy criticism, by among others Israel's ambassador to Stockholm and Sweden's Foreign Minister Margot Wallström.

“I think it was a terrible statement and I strongly reject it,” she told Swedish media on Monday morning.

Last week a photograph emerged of Kaplan having dinner with extremist members of far-right Turkish organization The Grey Wolves and the former deputy head of the Turkish Association in Sweden, Barbaros Leylani, who was in turn forced to step down this month after giving a speech urging Turks to kill what he branded “the Armenian dogs”.

Kaplan denied having extremist links, insisting he was a guest at the event and held no responsibility.

The 44-year-old was appointed to the government after Löfven's Social Democrats formed a coalition with the Greens in autumn 2014. But the events of the past week are not the first time he has been in hot water. Also in 2014, centre-left politician Nalin Pekgul accused him of having a hidden Islamist agenda.

And earlier that year Kaplan compared Swedish jihadists in Syria to Swedish freedom fighters in Finland during World War Two. He later apologized and said his comments had been misinterpreted.

Kaplan's fellow Green Party member Per Bolund, who is currently financial markets minister, will step in as interim housing minister. His IT portfolio will be taken over by Enterprise Minister Mikael Damberg.