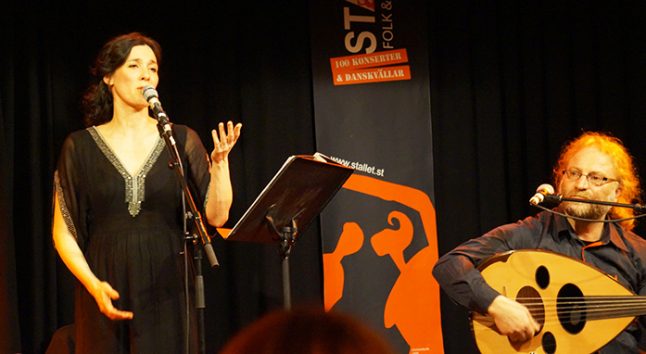 Fans of Arabic music weren’t sure what to expect when Swedish vocalist Sofia Berg Böhm took the stage recently in the Swedish capital to perform some of the most challenging Arabic-language songs ever written.

But the 44-year-old singer wowed the audience at an April 15th concert in Stockholm during a concert paying tribute to Oum Kalthoum, the late Egyptian singer who was one the most celebrated international vocalists from the region, often referred to as the “Star of the East”.

Prior to her performance, Sofia had been coached by Mousa Elias, a professor at the Royal Academy of Music in Stockholm who moved to Sweden from Syria in 1999.

“It was hard for her to deal with the language at first,” says Mousa, who is well-known musician in his own right, having in 1987 been named the best oud player in Syria.

“But she wanted to do it, and she did it. She can sing classic Arabic songs.”

And not only can Sofia sing them – she can sing them as well as any native-Arabic speaker could hope – if the reactions of the packed auditorium at the Stallet music venue are any guide.

“Many are very happy when they hear this,” Sofia says following the performance. “They were surprised – they said, ‘I could never imagine a Swede could sing this music so beautifully.' They were touched.”

Sofia’s love of music from the Middle and Far East has been growing since she was a student back in the 1990s, prompting her to choose Mousa as her professor.

“In first heard Arabic music as an adult, but I was captivated. I felt, ‘I have to do this. I have to learn this.’ It was fantastic,” Sofia describes.

And mastering the pronunciation and intonation has taken a great deal of practice for Sofia, who doesn’t speak Arabic.

“I write everything down phonetically and also write down the translation below that. That way as I sing I have contact with the meaning of the texts as well as the pronunciation,” she explains.

The event was organized by Re:orient, the Nordic region’s largest arranger of music and cultural events focusing on the Middle East, North Africa, and the Balkans.

And according to Re:orient co-founder Cecilia Hörnell-Sunar, the Oum Kalthoum tribute and events like it play an important role for spreading cultural awareness and understanding at a time when many in Sweden are fretting about the challenges of integration.

Performers take a bow at the Stallet. Photo: The Local

Nevertheless, it remains difficult for artists and cultural figures from the Middle East to break into the Swedish arts scene.

“There is a kind of cultural misconception,” she explains

Sofia agrees that Sweden is not as open to Arabic music as it could be, but she’s optimistic that the tide is changing – both in Sweden and in the rest of Europe.

“There’s a lot more Arabic music now than a few years ago, and the stars of the Arabic world have been coming here – some of their best musicians and singers,” she explains

“It’s a trend in Europe now and folk musicians are open for all sorts of folk music. We have galas and festivals for folk music of all types.

“And all folk music in Sweden is Swedish – even if it’s in Arabic!”

The music professor and oud specialist Mousa agrees that Sweden’s various cultural institutions are making an effort to reach out to artists that arrived in in Sweden from his home country of Syria as refugees in recent years.

“There’s no doubt there are artists from Syria with great skills, and many have been respected and embraced by the Swedish institutions,” he says.

Mousa cites several examples of cultural events and projects that have received support, including a Swedish-language play he arranged for children at Swedish schools – also about Oum Kalthoum.

“In September we will put on another play for Syrian kids in Jordanian and Turkish refugee camps,” Mousa adds.

“Unfortunately no Arab institution agreed to do support such projects, so whole thing is supported by Sweden – something we are very thankful for.”