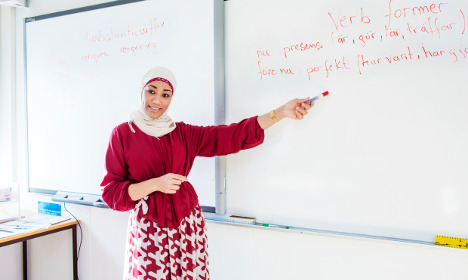 Sweden has now more or less run out of resources with which to cope with more refugees, but for much of 2015 the Nordic nation led the way in ameliorating the crisis.

But that's the way Sweden rolls. For several decades Sweden has been at the vanguard of social progressivism.

I remember English newspapers ridiculing Sweden in 1979 for becoming the first nation to outlaw the smacking of children. Now, the UK remains one of the few civilised nations to still indulge in such barbaric behaviour.

In 1972, Sweden also became the first country in the world to allow transsexuals to change their legal gender.

Sweden also has every right to be proud of its efforts on gender equality. There is still a way to go, but Sweden is years ahead of countries such as the UK and USA. Just one look at the number of fathers pushing buggies in any Swedish town centre tells you that.

This is a record of which to be proud. Sweden is a country which promotes tolerance and views bigotry with disdain.

However, Swedes can also be guilty of underplaying their role as one of the world's moral paragons.

It's as if the Swedish nature discourages the natives from being proud of their almost unparalleled civility. “Surely,” they seem to think, “everywhere else is this civilised too.”

But everywhere else is not. From my personal experience, the vast majority of the refugees that have come to Sweden from benighted countries such as Syria and Afghanistan have been bright, educated, thoughtful people.

They've also been hugely thankful to their host country for taking them in when they needed help.

Sweden cannot just leave refugees to it and hope they integrate.

Adherence to the Swedish model must be emphasised right from the start.

Sweden is one of the world's most advanced nations for a good reason – it has followed a progressive social and economic agenda which preaches equality of opportunity.

Gender and sexual equality courses for new arrivals, like those taught in Norway, must be first on the curriculum.

Sweden's status as a liberal powerhouse (socially and economically) must not be endangered by anything.

Not by the far-right in Sweden itself nor by the culturally super-conservative attitudes of a few of the refugees who have made their way here.

Newcomers must understand not only that tolerance is morally positive but that it also leads to a happier and more productive society.

This is also for the benefit of the newcomers. They must not be left to stew in their own resentments as has happened in France and Belgium and parts of Sweden too.

The quicker the newcomers become steeped in Swedish values, the quicker they become valuable and productive members of society.

Those that adapt to Swedish society should be offered a fast-track to training and employment.

Sweden's tolerant, advanced society is too precious to endanger by being overly indulgent of those who wish us harm. If a country offers you safe haven, your culture must bend to that nation's culture – not vice versa.

Contrary to the Sweden Democrats and their xenophobic ilk, Sweden needed new blood.

But Sweden must be proactive and make sure that the newcomers become a fresh chapter of Sweden's success story, not a festering footnote of failure.