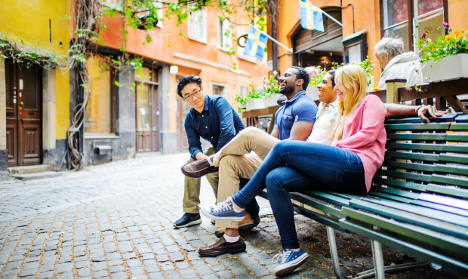 Friends hanging out in Stockholm's Old Town. Photo: Simon Paulin/Image Bank Sweden
Sweden recently came second in Europe for high food and drink taxes, which can send the cost of going out soaring way beyond what you might pay in other major cities. But taking a holiday in stunning Stockholm, or living here as an expat, is more doable on a low budget than you might imagine. Here are our six top tips.
1. Eat your main meal at lunchtime
Like the French's 'prix fixe' or 'menu du jour', Swedish restaurants often have daily lunch deals (known as Dagens Lunch) which offer you a hot meal, bread and coffee for under 100 kronor ($12). Even some of the most exclusive dining spots offer midday meals for less than 200 kronor ($25) – saving you at least 200 kronor on what you might pay for a similar meal during the evening. Stay away from the city centre for the best value snacks. In general the Östermalm district offers more formal dining spots, while Södermalm is packed with hipster cafes offering a range of global cuisines. Look out for food trucks here during the summer, too. Hot dogs cost just 20 kronor ($2.50) at Pressbyrån and 7-Eleven convenience stores.

Meatballs can cost less in Sweden. Photo: Miriam Preis/Image Bank Sweden
2. Visit the free museums
While entry to some of Stockholm's most popular attractions such as the nautical Vasa museum and the Abba museum remain pricey by European standards, Sweden's government recently made dozens of other state-owned museums completely free. These include Sweden's Museum of National History and Stockholm's Modern Art Museum. Click here to see the full list.

An exhibition by Louise Bourgois at Stockholm's Modern Art Museum last year. Photo: Vilhelm Stokstad/TT
3. Check out the city's suburban nature
More than two thirds of Stockholm is made up of water or green space, so you can soak up much of the city's gorgeous nature simply by walking around. And by hopping just a few subway stops away from the centre, you'll be able to get a park or a lake almost all to yourself. Our favourite spots include Vinterviken area, which is a pleasant 30-minute stroll from Liljeholmen subway stop, Hagaparken, which you can access on foot from Solna or Odenplan and Tivoliparken, easily reached from Bergshamra. People chilling in Hagaparken. Photo: Ingvar Karmhed/SvD/TT
4. Enjoy an outdoor workout
To see the city a slightly quicker pace, while discovering locals' favourite trails, tag along to one of Stockholm's numerous running clubs, many of which offer training sessions for free. Runday Monday, Nike's We Run Stockholm, SSideline City and Run with me Stockholm are among the most well known.
Keep an eye open for free outdoor gyms too (Tantolunden near Hornstull and the gym next to Eriksdalsbadet at Skanstull in the Södermalm neighbourhood are popular spots) or grab your skateboard and head to the skate park in Rålambshovsparken in Kungsholmen. Meetup and Couchsurfing also list free hikes, walking tours and other sporting events for expats.
READ ALSO: Nine perfect hiking spots on Stockholm's doorstep Swedes love to run together. Photo. Jonas Ekströmer/TT
5. Drink alcohol from Systembolaget
While a glass of wine will often set you back 80 kronor ($10) in a Stockholm bar, with beer typically priced at 50 kronor ($6) or more, prices are much cheaper in Sweden's state-run Systembolaget stores (the only shops that sell drinks with an alcohol content above three percent in Sweden). Most shut at 6pm or 7pm on weekdays and by 3pm on a Saturday and all are closed on Sundays, so a visit to this alcohol mecca does take some planning. However if you can transform yourself into a super-efficient Swede, you'll soon feel the cost savings of having friends round to your hostel, Airbnb or rental for a pre-dinner tipple. There's also no law against drinking sensibly outdoors in Sweden, so you can act like a local by having a couple of beers and a picnic during summer.

Photo: Susanne Walström/Image Bank Sweden
6. Barter at a Loppis
Swedes have a reputation for style, but most homegrown labels aren't cheap, even in their home city. However Stockholm has a huge second hand scene. As well as multiple vintage and charity stores, especially around the Mariatorget area, pop-up weekend outdoor flea markets (known as 'loppis') are a common sight across the city as soon as the snow melts. Check events listings on Facebook and Billetto to snap up some discounted Swedish design. Bring cash and a huge smile and you'll be able to haggle your way to a bargain.