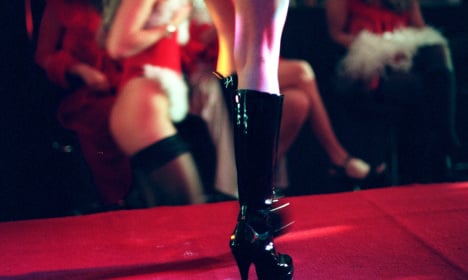 A striptease show not connected to this story. Photo: Fredrik Sandberg/FLT-PICA

Sweden has a global reputation for promoting gender equality and pupils from across Kalmar ended up lifting the lid on the secret initiation ceremonies after learning about sexual violence and power structures at a local literature festival.

Pupils from the high schools Jenny Nyströmskolan, Lats Kaggskolan and Stagneliusskolan shared their stories with a staff member at the event, who has been speaking to the Swedish media this week on condition of her own anonymity.

“The students asked me to bring forward what they had to say,” the teacher told broadcaster SVT.

“They feel that they have pointed out these abuses in the past but have never been listened to.”

The teacher singled out one student group called 'Bara Honor' ('Just Females') which invited prospective members to “dance sexy and take off their clothes while they were filmed”.

“Girls with big breasts got priority for admission to this group,” the whistleblower added.

The teacher has already submitted a letter to the head of the association for high schools in the area (Gymnasieförbundet), Joachim Håkansson.

“The students were very upset and asked for help to get the information to someone who can see that something is going on,” she wrote.

As well as initiation ceremonies in which girls shamed other girls, she said that other abuse reported by students included “boys-on-boys, boys-on-girls  (…) and violations against LGBT people”.

According to regional newspaper Östra Småland, some of the sorority-style clubs have been around for more than 20 years, but the ceremonies have become more high profile due to the increased use of social media. Some of the organisations are listed as sections of official student bodies recognised by schools, while others are independent.

SVT reported late on Wednesday that it contacted the student association at Lars Kaggskolan, which said it denied being linked to the alleged bullying.

There was no immediate word from staff or pupils at the other high schools.