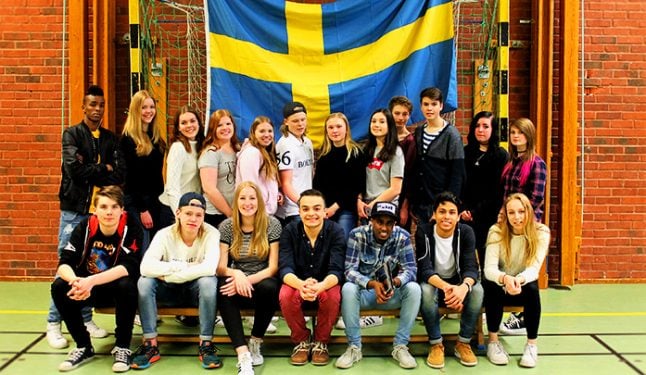 Ghaith (middle, front row) and his classmates at Bergundaskolan in Växjö. Photo: Private

Hi! My name is Ghaith Alkenayeh I'm from Syria and I’m 16 years old.

I came to Sweden on the 10th of August 2015 with my big brother. I started going to Bergundaskolan at the 5th of October and then I started in a preparation class for immigrants. After two months I moved to a Swedish class with Swedish pupils, they were very nice to me and to my friends.

They are such a great class with a lot of happy faces in it. The place where we took our photo was in the physical education hall. We had a lesson there and when we finished I asked the teacher if I could say a word to the class.

I told them about the picture that I wanted to take it with my Swedish friends. They were very happy about it and agreed in a very good way with me and they wanted me to sit in the middle.

They are all great and helpful to me, especially Emil Carlzon who helped me with a lot of things to take that photo. Also Anton Lövenmeyer is a very good friend for me. There are also the student assistant Khalid Hersi, and Cornelia Bjelkvik who is a friend of mine from another class.

I asked her to take that photo with us and much more from the awesome 9D Class, I really love my classmates.

Ghaith
Well I’m having a conversation with my friend Emil and we have a few questions in our minds that we want to ask to each other.

The first question is: What does Sweden means to you?

Emil
Sweden has always been my home country and always in my heart but I it feels like it’s turned into a racist country, like there are a lot of people who don’t want immigrants which is not nice.

I think it's a good country with lots of working laws, but these laws need to be more activated so all the people follow the law. But I mostly think Sweden is a great country.

Ghaith
In my opinion, Sweden is such a great country with good people but of course there are some bad people too. I wanted to come to Sweden so I could continue my studies and have a beautiful future with my family and school.

The second question is: what do we think of each other?

Emil
Me and my girlfriend Ellen agree that you [Ghaith] are the nicest and the kindest person we ever met, I honestly don't see anything bad in you, you are really a very nice guy.

Ghaith
For me, you [Emil] are such a great person who fights a lot for immigrant people and hates racist people too. We have a lot of things in common. For example, we play the same games, we love the same music, etc. You help me a lot in the school and what to think about around Swedish kids and so on. You are such a good friend of mine!

Last question: what is your opinion about immigrants?

Emil
We are all people of the same world we should be able to live together. If you can't live in your country you should probably leave and come here to Sweden, and just stay.