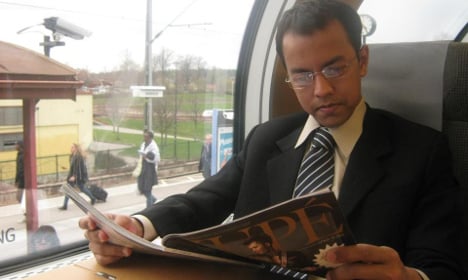 Syed Latif, who was born in Bangladesh. Photo: Private

Syed Latif, 35, is the textbook example of an immigration success story. He moved to Sweden to study at university in 2010 and later landed a job with an exchange bureau in Malmö. Highly skilled and integrated into the community, he also runs a language café in a nearby town to help refugees learn Swedish.

So it came as a bit of a shock to him when he was told he had been turned down for residency.

“I got a permanent job after six months on a temporary contract and applied for a work permit. When I got the rejection letter I said 'what?' It was unbelievable,” he told The Local on Friday, speaking Swedish as well as English fluently.

His case grabbed big headlines in Sweden after it was first reported earlier this spring. But here's the rub: it is not enough for a non-EU citizen to land work. Because EU residents have priority, the job itself, at the time of advertising, must be available and visible to everyone in the EU, according to existing rules.

The migration court found that this had not been the case, because Latif's job at the Ria Financial Service bureau in Malmö had only been advertised on LinkedIn, rather than through the Swedish job centre (Arbetsförmedlingen), which would also have made it searchable in the European job portal Eures.

Migration court judge Claes Lindblom told The Local via email on Friday that the court was bound by EU rules and directives – and said Latif had failed to prove that the job ad had been made widely available.

“LinkedIn does not have the same official status as Eures, but if the applicant can show that LinkedIn reaches as many readers as Eures the requirement could perhaps be met. An assertion alone is not enough for it to be considered proven,” he said. “What I think is reasonable is not relevant in this context.”

But a frustrated Latif said he found it strange that a country that needs to attract qualified global workers did not automatically recognize the network, despite the fact that the migration agency frequently uses the site, as well as the Swedish job centre and the Eures portal, to recruit its own staff.

“Is it my job to prove it? I showed them how and where I had applied. How can I prove exactly who's reading the ad? They don't seem to know what LinkedIn is. This is really, really something strange.”

A Stockholm-based spokesperson for LinkedIn, while not commenting on the specific case, confirmed to The Local that its job portal was the world's largest professional network on the internet.

Meanwhile, Latif's case has struck a chord with Swedes, with a petition called 'Let Syed Latif stay in Sweden' having attracted more than 2,700 signatures. And soon it could be on the EU agenda in Brussels.

Centre Party politician Fredrik Federley, who is a Swedish member of the European Parliament and deputy chairman of the Alde parliamentary group, said he had asked the European Commission to examine whether the Swedish court had interpreted the directive and existing legislation correctly.

“We're expecting a response within a couple of weeks. The reasonable thing would be to urgently give the matter right-of-appeal. I believe that the ruling goes beyond the directive and also beyond the intent of the legislation,” he told The Local.

Latif responded that he was moved that so many people had got behind him, but added that if nothing changed he would respect the court's verdict and leave Sweden to return to Bangladesh by May 11th.

“A lot of people like me and I have a lot of friends here. I'm living here, I studied, I pay tax, I do a lot of things for the society. I'm not even taking a krona from the society, I'm just giving. It's really strange.”