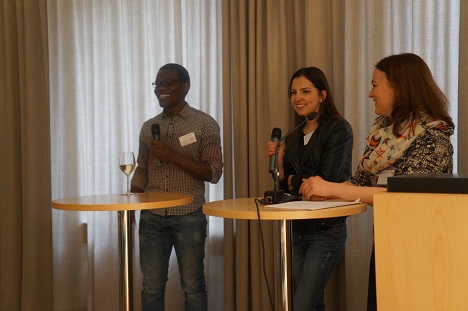 On Thursday evening a mingle and panel discussion was hosted at the Swedish Institute offices by the Royal Palace in Stockholm.

Several SI alumni joined a panel discussion to share their paths after their SI scholarships ended, and to talk about their career experiences in Sweden. The current SI students in attendance were able to hear first-hand career success stories, mingle, and get to know alumni and other NFGL members.

“The event was a joint effort between the alumni network and the local NFGL network in Stockholm,” Johanna Lundin at the Swedish Institute told SI News. “It's wonderful that it's an organic effort that they started on their own.”

SI alum Elena Kell contacted current NFGL members Maria Opanasenko and Bryans Mukasa about holding an event together, and the three of them pulled it off.

“I've been in Sweden something like six years now,” Elena told SI News.

Elena's partner is Swedish and she works full-time in Stockholm. She said her job means she doesn't have much time to organize events like this, but she hopes that other network members will feel inspired to continue hosting such things.

“I had a lot of freetime and thought it sounded like fun,” said Bryans Mukasa, a current student studying Urban Planning at KTH, the Royal Institute of Technology. Bryans hopes to stay in Sweden after graduation, like Elena. “I work with architecture and I would love to work with urban planning, migration, and integration here in Sweden,” he says. “I've started applying for some jobs. Hopefully things will work out; I'd love to stay here.”

Members gathered in the venue at the Swedish Institute's office and indulged in delivious Hors d'oeuvres and mingled before sitting down to listen to a panel discussion by SI alumni who have done just that – stayed in Sweden. Maria, the NFGL Stockholm network head, said it was a great evevnt to meet new people.

“It's also an amazing opportunity to meet former students who were just like us, to learn about what goes on after our time as SI scholars is over.”
But whether members wanted to stay or go home and invest their knowledge and experience in their home countries, the panel members had plenty of career tips.

“The SI scholarship definitely gave me a jump in my international career,” said Alexander Danilin, an SI alum from Russia.

He studied telecoms managemet on his SI scholarship and stayed in Sweden to take a master's degree in economics. After that he joined Swedish multinational company Ericsson as a trainee. “You have to have perserverance,” Alexander told the audience.

“You may have to send in 100 applications and hope to get 15 interviews that might lead to an actual opportunity.”

He confessed it's easy to get discouraged when you send in so many applications, and said it's a mental challenge to keep going, but that new graduates seeking jobs should remain positive and flexible.

“You may have a dream job in mind, but you may not get that job right away. The first job may not be what you really want, but you need to start somewhere.”

Monir Mazaheri, from Iran, currently works as a senior lecturer at Red Cross University. She's also a hobby pilot in her spare time. And the story of how she got her job was inspiring for many.

“I saw an ad for a senior lecturer, and it said they were looking for nurses — and I wasn't one — and people who spoke Swedish — which I didn't,” she says. “And I also wanted to do a post doc, not a senior lecturer job, but I heard everyone talking about how tough job interviews can be so I thought it would be worth going through the process anyway just to see what it was like.”
During the interview, they asked questions in Swedish and Manir answered in English.
“And I knew I wasn't going to take the job anyway, so I was very relaxed,” she recalls. “So when they called and said I got the job I asked 'are you sure you've called the right number?' The lesson is: don't be scared; dare to apply for something even if you don't fill all the requirements — you never know.”
Mustafa Tag-Eldeen, who has been working around the world with emergency management and civil defence, recommended that students create their own opportunities, test ideas in the field, get a team together and put things into practice.

Sukma Dwi Andrina, from Indonesia, worked for a time at the Stockholm Chamber of Commerce and is now an entrepreneur. Her advice for students about to graduate was to network  – which they were of course doing very well at the event.

“Set up coffee breaks and lunches and go to after work events,” she said. “You hvae to be stubborn and treat your job search like a job itself. Identify the networks that are relevant and can help you, and get away from the computer screen. Go out and meet people.”

She also recommend benefitting from the extensivev SI network, even though for many students the programme is almost over.

Some of her best friends now are people she didn't meet until the diploma ceremony when her programme finished.

“The friends I had when I was a student have all left now, but the people I'm close to are people I met at the diploma ceremony,” she says.