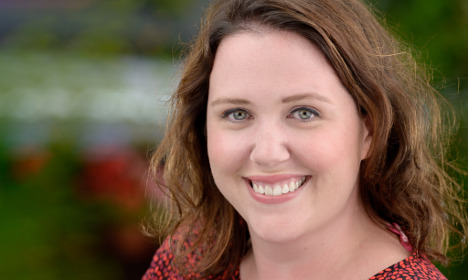 This article was written in April 2016. Shaena Harrison has since landed a new job at LinkedIn.

Harrison has been living in Stockholm for five years with her Swedish husband. “I'm in it for the long haul – living in Sweden is the closest thing to perfect I've ever experienced,” she tells us in her typically positive manner.

Ten years ago, the Canadian was on the verge of buying a house in her hometown of Winnipeg, when her grandma urged her to reconsider.

“She told me that if I bought the house, I'd be stuck there,” Harrison remembers. “So I decided to move abroad, and threw a dart at a map.” And it ended up in… Dublin.

Arriving in Ireland without a job or connections there, straight from her parent's house, it was Harrison's first taste of expat life; having to find an apartment, job and new friends from scratch. “Then three months in, I met my Swede!” says Harrison, referring to her now-husband.

After a year in Ireland, followed by several more in Scotland – where the couple married and had their first son – it was Harrison rather than her husband who wanted to return to his native country once their second child was on the way. Encouraged by the Nordic nation's family-friendly reputation, she says: “I told him 'pack your bags honey, we're moving to Stockholm!'”

But integrating into her new country wasn't as easy as she'd hoped.

“I had rose-tinted glasses about Sweden,” she admits. “The job market was more difficult than I anticipated. My husband works for CareerBuilder, a leading job board, so it was ironic that he was giving lectures on how to find work here while his own wife was struggling!”

The turning point came during a 2013 summer visit to Canada. Harrison got involved in the Colour Me Rad fun-run through her volunteer work with a charity, and she volunteered to help launch the event in Scandinavia – which she did that summer.

“After that, I was able to work out what I was good at and show what I'd done,” says Harrison.

She found out about events marketing and ticketing company Billetto through a friend and applied for a job there – a job she clearly loves. “I'm so happy to work with a company that's making waves – it's much more than ticketing! We help organizers expand and understand their audiences using insights tools, and we make it easier for people to find a huge range of events,” Harrison explains.

So does she have any advice for those wishing to follow in her footsteps and find work in Sweden?

“Just highlight your skills and make yourself stand out, think about what you can offer people.”

“When I got the job I was honest about my language skills and said I would be successful even using just English – fluency in Swedish comes with time. For me, it's like a tool – when I phone someone I can strike up a different conversation, in my language, influenced by my own culture.”

In fact, Harrison has noticed considerable cultural differences between Scandinavia and Canada. Sweden lived up to her expectations as a good place to raise children; she praises the “relaxed and slow culture” which means children start school later, usually at the age of seven, and enjoy their childhood.

But she adds: “At the other end of the spectrum, things need to happen – you need to be able to get out and do things and meet people!”

“In Canada, there's more of a gift of a gab, conversations happen randomly. In Sweden it's more about trust, so you need to be 'vouched for' in order to get in a circle – although when you're 'accepted' then you're in for life.”

“The world is all about making connections and meeting people, so it's good to be part of a company that helps people do that – it makes it easy for people to get in touch with everything going on in Sweden.”

“We work with major events and the festival scene, but we also cover indie, free and smaller events – which no one else is doing.”

This side of the job is important to the expat and she enjoys going along to the events Billetto works with – when we speak, she is looking forward to seeing a soul singer perform in the evening. She also enjoys the personal touch which comes from working in a tech company – as well as selling tickets, Billetto helps event organizers understand their audience, thanks to one of the features of member profiles on the site.

“We are building a whole community with the aim of getting loyalty and longevity. You can see the community for every single event, which is a personal touch no one else offers, and we cater to smaller, indie events which the big players won't cover.”

Her favourite event so far? “The Hard Rock Cafe had a event last year for The Alice Cooper Band. What no one knew was that the legendary Alice Cooper himself would make an impromptu appearance and play some iconic songs. Everyone was so shocked!”

And her outgoing nature has led to interesting experiences outside work too – for example, the time she met Canadian rocker Bryan Adams at a concert in Stockholm.

“When he sat down next to me, I asked if anyone had ever told him he looked like Bryan Adams, to which he chuckled and replied 'yeah, once or twice'. A few minutes later he shakes my hand, asks my name and where I'm from – before introducing himself as Bryan, from Canada…”