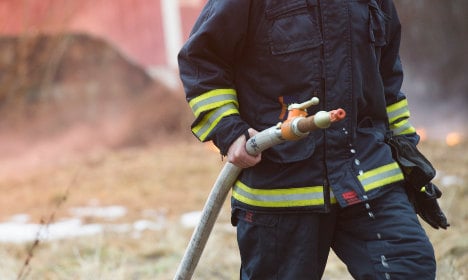 An archive picture of a fire officer. Photo: Fredrik Sandberg/TT

Fire crews in Härnösand on Sweden's east coast were battling the flames in the early hours of Monday to try to stop it from spreading to nearby properties. However, police said they had not managed to save the old school building itself, which had been gutted by the inferno.

“The flames are coming through the roof,” spokesperson Markus Grahn told the Aftonbladet tabloid.

It is not the first time the former school, which was in the process of being refurbished to be made into housing for young asylum seekers arriving in Sweden without their parents, is targeted. It burned on April 9th after another apparent arson attack, which failed at the time.

“It is completely insane this. That someone is running around lighting buildings on fire. It's sick people doing this, that is clear,” said Peter Hellström, fire and rescue unit chief in Härnösand.

Police, who were called out to the scene shortly after 4am, said they would launch an investigation into suspected arson as soon as the flames had been put out and the area of the fire had cooled off.

“Considering the previous arson and that there is no reasonable explanation why this one happened at this time, we suspect that the fire was started intentionally,” said Grahn.

No one was injured in the blaze, the latest in a string of similar attacks on refugee housing across Sweden which has seen investigations into several dozens of fire incidents in the past year.

The Nordic country took in around 163,000 asylum seekers last year, but the numbers have since dropped.