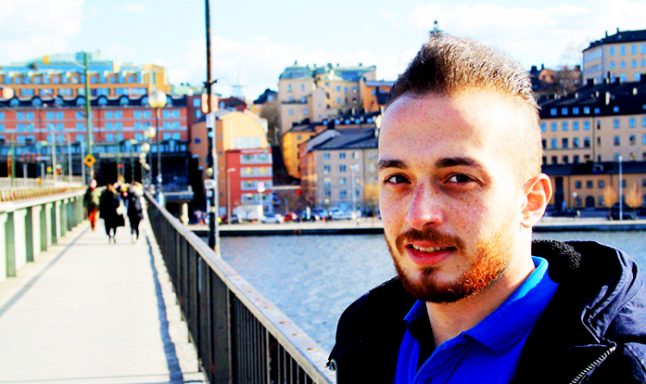 Like so many other newcomers from Syria in Europe, Yaser left Syria as conflict there left living conditions in his hometown of Aleppo “increasingly difficult”.

Having lost his father prior to the war, Yaser felt a responsibility to support his mother, but found it impossible to do so.

“Before the war we had wealth and a very good life,” he explains. “Now we have nothing – life became very hard.”

Yaser, who was enrolled in university in Aleppo and working in a hospital at the time, also feared the prospect of being called to active military duty.

With some financial help from an uncle in Algeria, Yaser was able to leave Syria and embark on what turned out to be a two-week journey through Turkey and Greece, ultimately ending up in Sweden.

“I left for the sole purpose of helping my mother,” he says.

Yaser’s first home in Sweden was the apartment of a friend, allowing him to avoid life in an asylum centre. And he took full advantage of the situation, venturing out into his new surroundings within days in search of new connections and opportunities.

He quickly stumbled onto a language café run by IM-Individuell Människöhjälp, a Swedish NGO working to combat poverty and exclusion.

“There I got to know a lovely Swede and she started to teach me Swedish,” Yaser recalls.

'An act of kindness'

But that wasn’t enough for Yaser, who was determined to branch out even further.

He next joined classes organized by the Swedish Federation of Immigrant Women’s Associations (Riksförbundet Internationella Föreningar för Invandrarkvinnor RIFFI). And then after telling a Swedish friend of he studied biochemistry, Yaser was introduced to a professor at Stockholm’s Royal Institute of Technology (Kungliga Tekniska Högskolan, KTH).

The professor explained to Yaser that he could attend his micro-biology course, but that he wouldn’t earn any credits for doing so.

“I still accepted as it was a chance for me to study the same things I already knew – but in Swedish,” Yaser explains. “It was an act of kindness that allowed me to meet other Swedes and improve my Swedish.”

During his time enrolled in the class, Yaser asked the Migration Agency (Migrationsverket) if he could get a temporary personal number that would allow him to officially enroll at the university, but his request was rejected.

“They told me there really is no such thing like that and that I would have to wait for my [asylum] decision,” he explains.

Yaser has since completed the course but remains hopeful he will be able to take more classes and pursue a degree in Sweden. But he admits it’s hard to remain optimistic when he faces an unknown but decidedly lengthy wait before knowing if he will be granted permission to stay in Sweden.

“The hard thing for me is not being able to complete my studies,” he says. “I haven`t even got an interview date from the Migration Agency. They’ve had my passport for six months and I am still waiting.”

But Yaser manages to keep busy, now serving as a volunteer with same IM-run language cafés he had participated in when he first arrived in Sweden.

The attitude of people he’s met over the past few months also helps keep him cheerful.

“They are nice and helpful, although a maybe a bit introverted,” he says. “But my Swedish friends don`t let me feel that I'm an alien.”

He admits however that for some reason, some Swedes react differently when they learn that he’s from Syria.

“Many girls get in touch with me and liked talking to me; they apparently think I’m Italian or French,” he says with a smile. However, once they learn I'm Syrian they just run away and stop talking to me.”

Despite not knowing when his wait will be over and the sometimes odd reactions from Swedes, Yaser’s hopes and dreams remain fairly straightforward.

“I want to complete my studies and work,” he explains. “That`s how I lived in Syria, and that`s how I want to live in Sweden.”