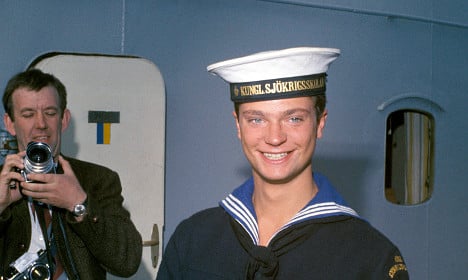 The King of Sweden back when he was a Crown Prince sailor on a stopover in Dublin on his 21st birthday. Photo: Olle Lindberg/TT

1. When the King turned 50 he got this eagle owl as a present. Take a moment to look at his face. Has the Swedish monarch ever been happier than when he shared this tender moment with Huberta? 2. It's 1982 and young Prince Carl Philip has his best gear on to celebrate daddy's big day. Carl Philip's all grown up now, of course, and this month became a proud dad himself. If the newborn Alexander is lucky he'll get to inherit those trousers one day. 3. In 1974 the German dressage champion Ilsebil Becher made the King very happy when she gave him this horse, Silver Dream, for his birthday. We're reliably informed that he did not look the gift horse in the mouth. 4. When the King visited Saab in Trollhättan in 2012 he was given this toy version of the company's first ever car, the Ursaab. His face is a dead giveaway. This is too small for me, he's thinking. But the giver put his mind at ease: it was really intended for his granddaughter Princess Estelle. A present that possibly scored highly on the We-are-not-amused-ometer. 5. In 2005 His Majesty headed to Malmö where, frankly, all the firefighters look too young to be out fighting fires. Nonetheless, the King got a helmet out of the trip, which is a decent haul considering the trip was in October. But what's going on in the mind of the firefighter closest to the regent's right arm? We may never know. 6. This is what the King was remembering when Saab gave him the toy car in 2012. Here he's three and carefree, just a tiny Crown Prince enjoying a day in the sun in 1949. The shadow at the bottom is a metaphor foretelling the loss of youth he would sense at the Saab factory all those years later. 7. It's May 1968, the Crown Prince has just turned 22 and he's attending the high school graduation party of his then girlfriend, Christina 'Titti' Wachtmeister. That fell by the wayside and four years later he met Silvia Sommerlath, with whom he went on to have three fine children.