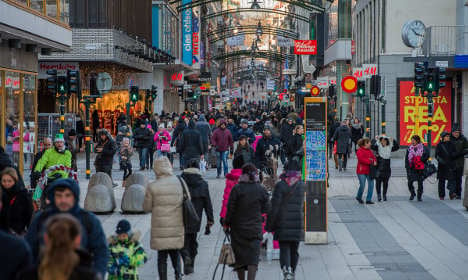 New information emerged late on Tuesday about a group of alleged terrorists that are said to have made their way to Sweden.

Broadcaster NBC News quoted an unnamed senior Iraqi security official as saying that Iraq had found intelligence “about an Isis plan to target the Swedish capital Stockholm” involving seven or eight Iraqis who were former members of the al-Qaeda terrorist organization in the Middle East.

“Those Isis militants are Iraqis, and were able to arrive in Sweden in 2015 with those thousands who emigrate from different countries to Europe,” the official told NBC News, saying the Iraqi intelligence service had passed details about the individuals to the Swedish security services.

Sweden's security police Säpo has confirmed it is investigating reports of a potential terror plot, but has refused to comment on specific claims in Swedish and global media involving alleged Iraqi militants.

The Reuters newswire cited another Iraqi security source saying that six Iraqis had left Iraq in February 2015, entering Sweden via Turkey: “They want to conduct special operations to force Sweden to withdraw from the international military coalition [against Isis].”

However, a spokesman at Iraq's interior ministry said they could not confirm the information.

“Our security services can neither confirm nor deny that it has conveyed this information to its Swedish equivalent. The Iraqi intelligence service liaises with its counterparts in the EU but never shares any information of this kind to the media,” Ibrahim al-Ibadi told the TT news agency.

Meanwhile the US embassy in Stockholm warned its citizens in Europe to stay alert and “when in public places or using mass transportation. Be aware of immediate surroundings and avoid crowded places. Exercise particular caution during religious holidays and at large festivals or events”.

News of a terror threat come at a critical time for Stockholm, which is set to celebrate King Carl XVI Gustaf's 70th birthday this weekend, as well as play host to the Eurovision Song Contest in just a few weeks. Police said on Tuesday that they had met to discuss potential security risks with organizers.

“It was a scheduled meeting for the special team created ahead of the event (…) Obviously we have shared the information we are able to share,” police spokesperson Kjell Lindgren told the DN newspaper.

Earlier this year Sweden lowered its terror threat level after raising it briefly in November, days after the attacks in Paris left 130 people dead and during a separate hunt for a suspected terrorist in the Nordic country.

However, the terror suspect police arrested soon afterwards in northern Sweden turned out to be innocent and later demanded compensation from the Swedish government.

A 20-year-old former teaching student accused of trying to build a bomb in Stockholm is currently awaiting a verdict.