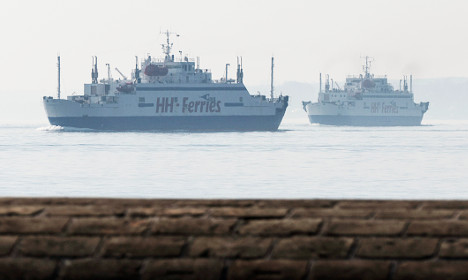 In a letter to its freight customers, HH Ferries said several migrants had been found hanging from the undersides of trucks in Helsingør in recent days in an apparent attempt to avoid ID checks.

The ferry operator’s CEO Henrik Rørbæk urged drivers to look out for any attempts to board ferries illegally.

“This is of course an unfortunate and potentially very dangerous situation that these people put themselves and others in,” he wrote in the letter, Danish news agency Ritzau reported.

The number of people trying to make their way from Denmark to Sweden by sea has risen in recent weeks, according to the Danish Shipowners’ Association.

“When vehicles stop on the road down to the ferry they sneak up under the trucks.”

Swedish police said earlier this week that they had received reports of people who had successfully entered the country on trucks.

Details were scarce but police said members of the pubic had seen migrants under a truck on the E6 motorway in Helsingborg, while others were seen leaving a truck at a nearby rest stop.

Sweden took in a record 160,000 asylum seekers in 2015 before introducing ID checks to stem the flow.

The influx put the country’s finances and housing under strain and Prime Minister Stefan Löfven faced a hearing at the parliamentary constitutional committee on Friday morning to answer questions about Sweden’s handling of the crisis.

Löfven argued that not even the migration agency had foreseen the dramatic rise in refugee arrivals that saw an average of 10,000 asylum seekers each week make their way to Sweden in the autumn.

Sweden put its agencies on crisis alert from August and the government took around 70 decisions designed to control the situation, Löfven said.

“Thanks to the work of the crisis organization, intensified information-gathering and flexible working structures the government was able in the autumn to take the necessary decisions to reduce the number of people seeking asylum in Sweden and relieve the acute pressure on the reception process,” he said.

The Prime Minister was summoned to the constitutional committee by politicians including Jessica Polfjärd from the centre-right Moderates who felt the government had handled the refugee crisis badly and let it get out of hand.

“Since the government has ultimate responsibility for crisis management we think there are issues that need to be fully looked into so the Swedish people can be told why there were delays,” Polfjärd told newspaper Dagens Nyheter when she reported the government to the constitutional committee in January.