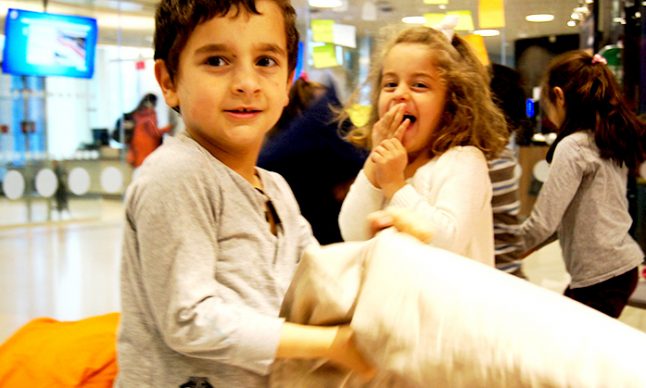 A room on the campus of Malmö University is filled with songs, smiles, and high-pitched squeals from roughly a dozen young children gathered for the final session of an Arabic language “preschool” that has been running once a week since November.

In addition to singing, the session includes storytelling, crafts, and short skits – all carried out in Classical Arabic.

“The kids really enjoyed the activities,” says May Samhouri, a 42-year-old mother, educator, social entrepreneur and one of the event’s organizers. “Some even went to their school libraries with their teachers to get Arabic stories for the final session.”

Inspiration for the classes came from Sesame Street, one of the most popular children’s television programmes in the world.

For millions of people around the world born after 1970, Sesame Street and the many plush characters that star in the show conjure up warm memories of learning and laughing in front of the television screen as a child.

May (right) teaching Arabic to preschoolers in Skåne. Photo: Private

One of those children was May, who grew up in Damascus and arrived in Sweden with her family in 2014.

Growing up in Syria, she regularly watched the Arabic version of Sesame Street, Iftah Ya Simsim, which translates to “Open Sesame” – which was broadcast across 22 Arabic speaking countries from 1979-1990.

“I’ve always had a great passion for the Arabic language,” she explains.

Last September, May was part of a group of four Swedes and two Arabs who launched an organization called Marhaba (“Hello” in English) that features Swedes and Arabs working together to “bridge the gap between newcomers and established Swedes” through, workshops, language cafes and other types of support.

“I specialize in conducting conversations with children, specifically how to talk to kids in a Classical Arabic,” she adds.

May and her husband managed to learn Swedish within six months of arriving in the country, and she was at first thrilled at how easily the new language came to her three children.

“My kids learned Swedish very fast and I was really proud of them,” she recalls. “But at the same time I was worried about their mother tongue. I was afraid they would never get the chance to learn and use it properly.”

As a quick fix, May turned to clips from “Open Sesame” on YouTube, sitting down with her children to expose them to Classical Arabic in a fun and entertaining context – much like she had as a child

“I saw my kids engaging and interacting with the language in a new way, and that they wanted to learn more,” May recalls.

Before long, her children were comparing Swedish and Arabic grammar, analyzing the differences between the two languages without even realizing it.

Encouraged by the results and hoping to in spread the concept further, May contacted several friends where she lives in Teckomatorp, a community between Malmö and Lund in southern Sweden.

Yousef relaxes during a break in the day's activities. Photo: Private

“Teaching the kids their mother language properly, can help stabilize them psychologically and make them more likely flexible and better able to adapt to new communities,” she explains. “The more a child is attached to and has knowledge of his or her mother tongue, the more multicultural he/she can become.”

The project began at a local preschool and consisted of weekly get-togethers that put Classical Arabic in focus – but in a way that differs from how the language is normally taught in Sweden: with traditional “boring” classroom instruction or by relying on religious texts.

“We do not want to teach kids religion,” May clarifies. “That’s a task for parents to do at home, not at school. There are many secular Arabs in Sweden want to teach their kids the language, but not religion.”

May also expects the Sesame Street-inspired “edutainment” approach to have ripple effects beyond the small group of preschoolers from Teckomatorp to immigrant families all over Sweden struggling to hand on to their mother tongue.

“It’s an effective method,” she explains. “It could easily be replicated across the country, and not just for Arabic.”

Note: Read more about May's journey from Syria to Sweden through MIG Talks, a joint communications effort initiated by the Swedish Migration Agency (in Swedish)

May sits with a group of youngsters as they learn Arabic. Photo: Private