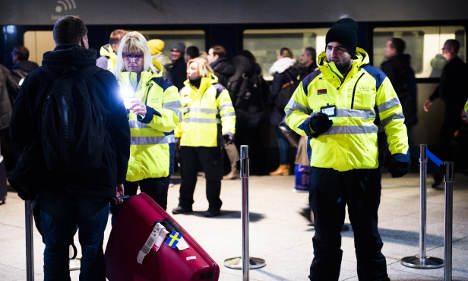 Checks on passengers at Kastrup airport in Copenhagen, close to the border with Sweden. Photo: Emil Langvad/TT

Sweden, Denmark, Austria, Belgium, France and Germany have written a letter to the European Commission calling for current temporary controls to be extended for a period of six months, and for other member states in the Schengen zone to be able to introduce further checks of up to two years if they deem it necessary.

Schengen is the EU's free-travel passport-free area where until recently 400 million EU citizens were able to move around as they wished, while tourists could also travel by land across the zone unhindered.

However since last September, eight of the 26 member states in the area have introduced border checks to help stem and monitor the flow of migrants, under EU rules which allow countries to reinstate checks in certain circumstances for a maximum of eight months.

Germany, the first to close its borders will reach its time limit in May. Sweden, which started tightening checks in November will follow in July.

Migration patterns in Europe have shifted since controls were stepped up last year, stopping thousands of refugees taking the previously popular Balkan migration route to Sweden and Germany. The proportion of refugees reaching western Europe has also fallen as a result of the deal reached between the EU and Turkey and March, which sees migrants and refugees sent back from Greece to Turkey.

However figures from the International Organisation for Migration suggests that the total number of migrants arriving by boat to Italy or Greece increased in the first four months of 2016, compared to a year earlier.