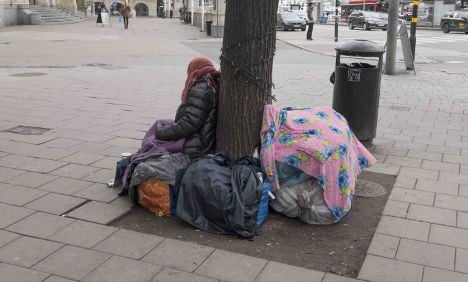 A beggar in Stockholm. Photo: Leif Blom/TT
“We believe that the police treatment of the data is legal,” Sigurd Heuman, chairman of the Swedish Commission on Security and Integrity Protection, said in a statement.  “The personal information comes mostly from the crime reports and tips about crime. We have not found any data from interviews with beggars.”
Swedish Radio’s Ekot programme revealed in December that police were building a national database of Roma, carrying out detailed interviews with beggars across the country which involved collecting their names and asking whether they were begging voluntarily, among other questions.
The report likened the register to a much-criticised database of Swedish Roma built by police in Skåne, southern Sweden, which was ruled illegal last year.
Fabian Holgersson, who carried out the watchdog’s appraisal, said that the earlier register had been different in significant ways.
“That was a very problematic register, there were a lot of questions. We criticised it very strongly and said that it had to be erased,” he told The Local.
“The big difference this time is that police have been able to explain why they needed to have this information in their systems. Their main priority has been to get a better picture of trafficking in human beings in connection to begging.”
He said that Roma in Sweden were “a very exposed group” on whom police had little information.
As Bulgarian and Romanian Roma are EU citizens, they have no requirement to secure a work or residency permit, or register in any other way on entry to the country.
Police in December stressed that police needed more visibility of the Roma living in Sweden in order to protect them from abuse.
“If we in the police see that there is a vulnerable person that we suspect may fare badly, we need to ask questions of care,” Linda Staaf, Director of National Intelligence, told Sveriges Radio.
Hans Caldaras, a Swedish singer and Roma activist, said that the study was simply an excuse to compile statistics based on ethnicity (which is not usually done in Sweden) and to get Roma “out of the country”.
Martin Valfridsson, Sweden's national coordinator for vulnerable EU citizens, estimated in a report on the Roma published in February that an estimated 5,000 of them had come to beg in Sweden in 2015
He called on Swedes to stop giving money to beggars, and instead give their money to charities helping lift the community out of poverty in their home countries.
He also warned Swedish municipalities against accepting Roma children in schools unless they have a permanent address, or providing sites where Roma can erect temporary dwellings.
“The message is that you're allowed to come here, but if you do you must live here legally. Society must have a strict approach to that you're not allowed to settle on someone else's land,” he said.