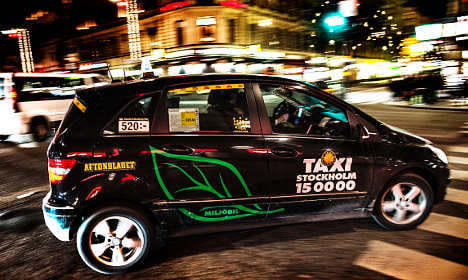 Ten out of 14 drivers were happy to help a reporter with a hidden camera who claimed to want to find a prostitute.

The drivers gave the reporter tips on how to find prostitutes, how much to pay, and how to avoid detection by the police.

“This is pure illegal activity, and they are consciously engaging in it,” said Simon Häggström, the head of a police unit that combats prostitution in the Swedish capital.

The report also shows a taxi driver picking up a prostitute and taking her to a secluded car park. When the driver notices the camera he and the woman both exit the car through the rear doors.

The driver denied paying for sex when confronted by the reporter, but police say they have arrested several taxi drivers in the area around Malmskillnadsgatan, the street in Stockholm most closely associated with the sex trade.

“This is the profession we have arrested most often for sex purchases,” Simon Häggström told TV4.

Taxi Stockholm said it was not aware that its drivers were helping clients find prostitutes and described the ones that did as just “a few rotten eggs in the basket”.

“What you have found shows that there may be individuals who are facilitating this. It is unacceptable and deeply unfortunate,” Taxi Stockholm’s CEO Johan Lagerhäl told TV4.

Taxi Stockholm, which has 4,500 drivers spread across the city, said it would review its screening procedures in light of the news investigation.

The report will be broadcast on Tuesday evening as part of TV4’s investigative news programme Kalla Fakta.

It is not illegal to sell sexual services in Sweden, but in 1999 the country became the first place in the world to criminalise buying sex, in a move designed to punish clients rather than those working in the industry.

The law helped halve the number of streetwalkers in Sweden's cities by 2010, but the country is still facing a growing problem of sex sold over the internet and via mobile apps.

Earlier this year police in Stockholm said the rise of Airbnb in the capital has resulted in pimps booking apartments by using fake profiles.