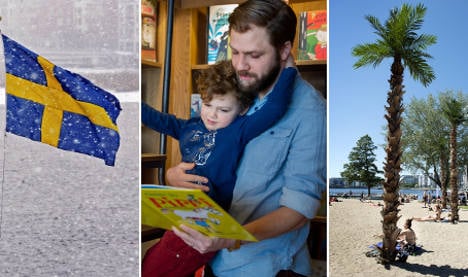 Living in Stockholm isn't all about Abba and meatballs. Photos: Hasse Holmberg/Anders Wikström/Christine Olsson/TT
1. It's a secret beach destination
Sweden's full of forests right? True. But did you know Stockholm also boasts dozens of city beaches and swimming spots where you can head for a dip on your lunch hour? The water might be a little on the cool side, but it's not salty (these water holes are mostly lakes and inlets). And whereas you might jostle for a spot on the sand in other cities nestled on the water such as Sydney or Rio, if you pick the right time and place in Sweden's capital you can easily escape the crowds. Tanto beach in Hornstull, Stockholm. Photo: Hasse Holmberg
2. Daddy day care
Sweden's parental leave system encourages men to take time off to look after their children and there are noticebly more fathers out pushing buggies during the week than you'd find in most other countries. Shared childcare, family time and work-life balance are given a higher priority by both the state and most companies. The Nordic nation's still got a way to go to achieving complete gender equality, but the number of female role models in politics, business and sport in Sweden are proof that something's working. It's an environment that's definitely made me more feminist, despite being nowhere near having kids myself.

DEBATE: 'Moving to Sweden has made me more feminist' http://t.co/Kc6WdUamkB (English version of @metrodebatt) pic.twitter.com/zJoVFarein

3. Swedes speak unbeatable English
Swedes are the best in the world at speaking English as a foreign language. While this can sometimes be frustrating to immigrants seeking to pick up the local lingo, it makes Stockholm a very easy place to live if you're an Anglophone. It never fails to impress me how many people speak English to such a high level, from businesspeople to barbers, schoolchildren to pensioners.

There's less small talk at the hairdressers in Sweden than in other countries, but if you want to chat in English you usually can. Photo: Fredrik Sandberg/TT
4. There's a supportive startup scene
You'll find plenty of global chatter about Stockholm's disruptive startup scene right now. But away from the hype, the Swedish capital's ecosystem for budding new businesses is genuinely both supportive and inspiring. If you weren't planning to start your own company, you could well be persuaded after mingling with this crowd.
From free state-funded advice in a range of languages to a whole host of tech festivals and networking events and a growing number of co-living work spaces, it's easy to meet and learn from other people working in a range of industries. And collaboration is a word you'll hear way more than competition.

Spotify's founder Daniel Ek speaking at the Stockholm Tech Fest event. Photo: Magnus Hjalmarson Neideman/SvD/TT
5. You can walk on water…
When temperatures have dropped to -20C and you realise you really should have invested in that pricey winter coat, there is an amazing silver lining during Stockholm's bracing winter: you can walk or skate across the city's lakes and waterways. Not only does this save you time, you also feel briefly like a superhero. People walking their dogs on a frozen lake in Stockholm. Photo: Hasse Holmberg/TT
6. …but you'll never freeze indoors
The winter in Sweden may be dark and chilly, however most homes in the city are designed to keep you toasty. Walls are well insulated and the state-funded and private companies that run Stockholm's many apartment blocks usually include heating in the rent and adjust it seasonally for the whole building. This may seem a bit Big Brother-like to some, but when you hear stories of pensioners in other countries freezing to death because they're trying to save money by scrimping on their energy bills, it starts to make sense. Sheepskin rugs are often more decorative than practical in Sweden. Photo: Anders Wiklund/TT
7. Being single is totally normal
Stockholm has one of the world's highest proportions of residents living alone. While navigating the dating scene comes with its own unique set of challenges, if you are single, the Swedish capital might just be a better place to live than other similar-sized cities simply because there are plenty of others around to enjoy the experience with, even into your forties and beyond. If you don't want to play gooseberry at a couples dinner party you'll never have to. Swedes are obsessed with organised activities; you'll find countless climbing, dancing, running, drama or business groups where you can meet likeminded people in the same boat.
8. The international community couldn't be more open
Swedes can have a reputation for being colder than other nationalities and while that's not always deserved, it is perhaps one of the reasons that Stockholm's global community of expats and immigrants is so warm and welcoming.
Thanks to online social networks such as Meetup and Couchsurfing and free state-funded Swedish lessons for foreigners, newcomers can can easily link up with other international residents. Here, you're free to discuss delicate questions such as “is it ever okay to buy a round of beer here?” and “why are all Swedes obsessed with hugging?” while in supportive company. International friends hanging out in Stockholm's Old Town. Photo: Simon Paulin/TT
9. It only takes 20 minutes to escape
It might sound bizarre to love a city where you're able to make a swift exit, but Stockholm's proximity to rural nature means that if you've had enough of life in the (not-actually-that-busy) capital, it's easy to get a change of scene. You don't need a car either. The city's subway network, commuter trains, boats and busses operate regular services even at weekends, dropping you close to the surrounding region's lakes, trails and forests.
Seriously fed up of the Swedish capital? Jump on the super-speedy Arlanda Express and you'll arrive at Stockholm's main airport in under 20 minutes, from where you can jet off to dozens of international locations. But once you're away, trust us, you'll soon be longing to return.