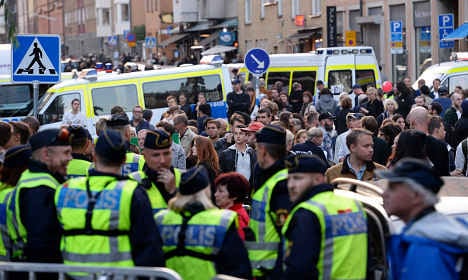 Police on standby at a political rally in 2014. Photo: Jonas Ekströmer/TT

Police officers under the age of 40 are leaving at an unprecedented rate, new police agency figures show.

Almost as many young cops quit in the first three months of this year as in all of 2013.

But police training colleges are struggling to attract new applicants, while many new recruits don’t last long in the job.

“If the salary review later in May is seen as a deeply unfair assessment of police work it will lead to a mass exodus,” national police union chairwoman Lena Nitz told the TT newswire.

By the end of March this year 60 officers in this age bracket had already left.

The same worrying trend can also be seen among older employees. Three years ago, 100 officers aged 40-60 terminated their employment, compared to an estimated 180 this year.

“This trend is very serious and it’s obvious the agency hasn’t understood the seriousness. We have a police shortage today and it’s going to become more acute,” said Lena Nitz.

The union chief said frustration with salaries was the main reason people were turning their backs on the police agency.

“I’m getting incredibly strong signals that a lot of police officers think the limit has been reached. Now it’s in Dan Eliasson’s hands to ensure that police officers are valued,” said Nitz.

The union has previously expressed anger over the police agency’s failure to honour a promise to pay officers at least 24,500 kronor ($3,000) per month.

Officers have also reacted negatively to last year’s revamp of the police agency, which was intended to modernise procedures and make the police more effective.

But in a survey of 2,500 officers carried out by the union, not a single one said the agency had succeeded in its goal.

Instead many said they felt much more stressed now, with staff slamming as counterproductive a re-organization that had left them with little time to eat or even go to the toilet.