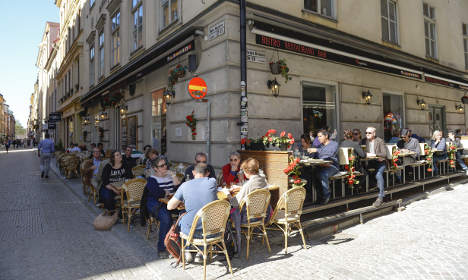 Temperatures in Stockholm are expected to reach 26C according to national broadcaster SVT, with even southern Norrland due to hit numbers in the 20s.

But be warned: experts say that cooler air from the north will gradually take hold as the week progresses, with the possibility of snow as soon as Tuesday.

Swedes basked in the sun last week as the spring dramatically gave way to the summer, with a high of 25.2C registered in the small town of Delsbo in the east of the country.

And with high pressure persisting there is a good chance that Stockholm will be warmer than the Mediterranean on Monday, with the Swedish capital’s expected temperatures dwarfing the 18C forecast for Barcelona.

Sweden officially entered summer last week as temperatures persistently reached double digits. The country’s forecasters decree that the summer has started when thermometers register above 10C for more than five days in a row.

Despite highs of 25-26C in recent days meteorologists say a new benchmark for May has not yet been achieved however.

“Even if it’s abnormally warm for May, it’s not yet record weather,” Sandra Andersson from national weather institute SMHI told news agency TT.

It’s spring in Stockholm and we’re expecting temperatures around 20 degrees Celsius for the rest of the week! 🙂 pic.twitter.com/26a4OyBZDp

Andersson warns that revellers won’t have too long to enjoy the sun, as cold air from the north progressively takes hold.

“In the northern part of the country there has already been a little bit of colder air, and it will slowly move south. There will be change in the coming week,” she added.

In contrast to the heat in the capital, rain could fall in the north of Sweden on Monday, and in the worst case scenario there could even be some sleet by Tuesday.

That cold air will gradually move south, to the point that only the Götaland region will still feel warm by the end of the week. Things will continue to deteriorate next weekend, where there is a risk of chilly weather even in the southernmost parts of the country. We hope you enjoyed it while it lasted.