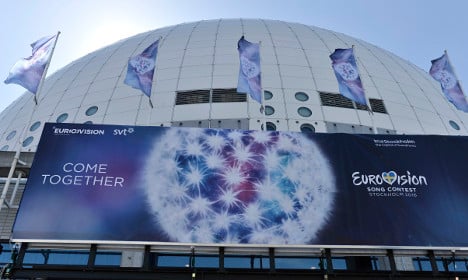 Held with the tagline 'Come Together', the Swedish capital has invested around 95 million kronor in a swish fan area at the city’s Kungsträdgården park. Yet a report from national broadcaster SVT suggests the seemingly inclusive motto isn’t true for all.

The state broadcaster has posted a video on its website that purportedly shows one of the guards from the fan area asking an EU migrant to leave the premises and await the arrival of the police. When a Swedish speaker is seen with the migrant asked why his counterpart must wait outside, the guard replies that they “don’t want people who take things”.

The speaker in question was Hans Caldaras from HEM, an association that works with homeless EU migrants in Sweden. He told SVT that the guard went on to show him and his counterpart a piece of paper containing rules for access to the Kungsträdgården fan area, the details of which were also captured on camera.

The paper states that it is forbidden to beg, pick up cans (which can be exchanged for money as part of Sweden’s national recycling scheme) or even “dress up like Micky Mouse” in the fan zone. Written in Romanian as well as Swedish, the document also states that “ni” (Swedish for the collective “you”) should “keep away from the area to avoid coming into contact with the police”.

Though the paper was not signed, the City of Stockholm later confirmed that they produced it in conjunction with the police.

“The written information was an attempt to efficiently communicate the rules of conduct that we have come up with together with the police in order to have a pleasant arrangement,” explained Jesper Ackinger, the City of Stockholm’s Eurovision Song Contest Project Leader, before later elaborating that the note has now been taken out of use as it was “unfortunately worded”.

Stockholm Mayor Karin Manngård has subsequently moved to clarify the city's stance on access to the fan zone, saying that it is “unacceptable” to wrongfully reject entry to the park.

“Our events will be open to all, but that also means that everyone must follow the rules in place in the area,” she wrote. “It is not acceptable if someone is wrongfully turned away and that should not occur. All staff that work at the event will do so in line with the city’s values”.