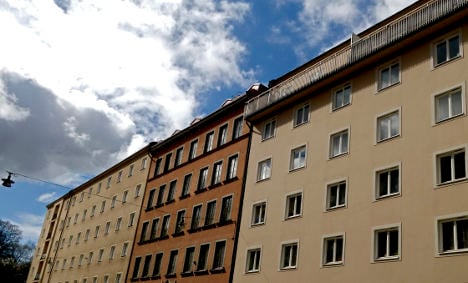 Sweden's economy is on track for a good year, with economic growth set to swell by 3.9 percent in 2016. But a report by Sweden's largest business federation is warning that the Nordic nation should not get complacent.

According to the paper by the Confederation of Swedish Enterprise (Svenskt Näringsliv), 61 percent of companies have experienced recruitment problems over the last year, with employers citing Sweden's housing shortage in 31 percent of cases.

Svenskt Näringsliv's Acting Chief Economist Jonas Frycklund argues that this could make it difficult for Sweden to reach its goal of having the lowest unemployment in the EU.

“Sweden has obvious structural problems that tend to hold back growth,” he said in a statement on Tuesday, adding that there was a significant “risk of bottlenecking” in the Swedish economy.

Property prices in the nation have shot up in recent years, while a divided rental market means that those without queuing points in a city's housing queue often have to take short, second-hand contracts at inflated prices. This means that recruiters seeking to attract talent from other parts of the country or abroad can struggle to persuade people to relocate.

Frycklund's strong words come just a day ahead of a major protest in Stockholm organised by startup entrepreneurs in the face of growing competition for affordable housing, as also highlighted by Spotify's founders last month.

“Our success is entirely dependent on being able to attract the best talent from around the world,” wrote Daniel Ek and Martin Lorentzon in an open letter, noting that they have “repeatedly pointed out” the lack of access to affordable rental properties in the capital to national and regional authorities.

More than 1200 global entrepreneurs have signed up to join Wednesday's gathering on its Facebook event page.

Frycklund's report also argues that large-scale migration and rapid technological developments are creating shifting demands within the Swedish economy and suggests that some 460,000 new jobs will be needed in Sweden by 2020 in order for the Scandinavian country to reach its employment target.

“To achieve this requires an aggressive reform agenda for a better environment, not least to lower the thresholds into the labour market so that more people can get a job,” he said.

Unions argue that this guarantees fairer base wages than in many other countries, while critics argue that it prevents those with less education, as well as non-Swedish speakers from getting their first step on the labour ladder.