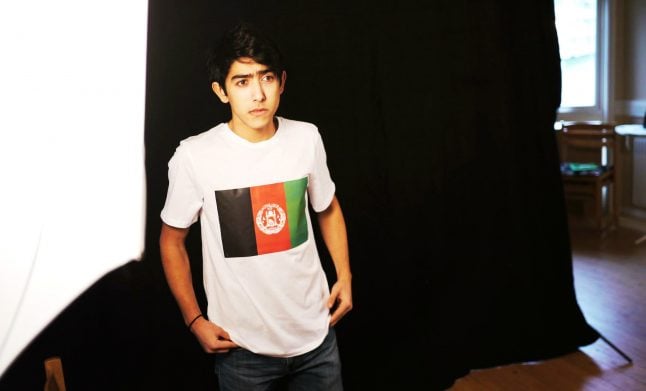 Asad Nazari on the set of his film. Photo: Region Värmland

Entitled “Where is home?”, Asad’s film was honoured at the Stockolm Junior Film Festival, winning the 1-minute film category for 11 to 14-year-olds.

“We as an audience are brought along on a journey that in a very creative way shows what it’s like to travel from country to country in search of a new home,” the jury said of the film.

The film (embedded below) utilizes time-lapse imagery to portray the different countries Asad saw as his home during his journey to Sweden, which ultimately took him to Grums municipality in Värmland in western Sweden.

“I want to be a filmmaker,” he tells The Local following his win.

In the film, he puts on different t-shirts, each marked with flags from the eleven different countries he passed through traveling from Afghanistan to Sweden.

“I got help from my friends, using different buses and trains and so on,” he says about his trek.

In the final frame of the film, Asad is seen wearing a big smile and a t-shirt with the flag of Sweden – the country where he hopes to can study and build his future.

He explains that he came to Sweden following “a friend’s advice”.

“He told me, ‘Sweden is good and schools are good in Sweden.’”

Asad’s emergence as a budding filmmaker began after a representative from Region Värmland visited the refugee housing centre where he lived in October 2015 looking for participants to join a filmmaking course for unaccompanied minor children.

Asad was one of only five out of 20 participants who ended up completing the two-month workshop. And according to Mustafa Hashimi, a film educator with Region Värmland who also migrated to Sweden from Afghanistan, the filmmaking skills Asad learned really helped the teen open up.

“We tried to motivate kids, to let them express their emotions and speak, and interact – it’s good for their feelings,” he explains.

“Asad is a quiet and shy kid, but now he is hugely changed. He can talk interact, and really express himself.”

When asked about his cultural influences and inspirations, he offers answers one might expect from a typical teenager.

“I love pop music. And Justin Bieber,” he says. “And the Ironman films are my favourite movies.”