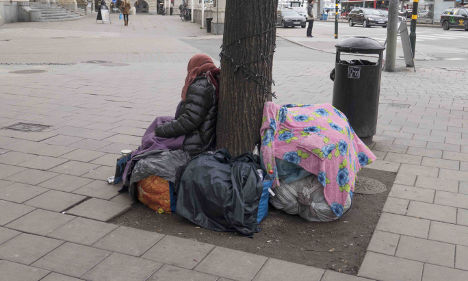 Police in Sweden's capital have begun a campaign designed to highlight some of the challenges posed by the city's beggars — who are mostly EU migrants from Romania and Bulgaria — setting up shop on Stockholm's streets, often surrounded by several bags of belongings.

“Our campaign 'a sidewalk is accessible for everyone' is about making sure people who are disabled in any way don't have to go around billboards, garbage bags, lights, bikes or beggars who are basically settled on the sidewalk,” Mats Eriksson, a communications officer for Stockholm police told Swedish daily Dagens Nyheter.

Police have distributed flyers in a number of languages to EU migrants found begging for cash in public spaces, citing Sweden's Public Order Act which states that people are not allowed to use pavements or roads in a way that might prevent motorists, cyclists or pedestrians passing through.

“We are telling them 'no, it is not illegal to beg', but you cannot sit on soft drink crates or similar all day with all of your belongings and take up everyone else's street space'. We have received many complaints from residents who find it difficult to get around on the sidewalk,” explained Eriksson. The move comes amid ongoing debates surrounding the number of beggars on Sweden's streets.

A study last year suggested that around 4,000 vulnerable EU migrants are now living in the Nordic nation, with many of them sleeping rough and asking for money.

A survey last month from pollster Sifo indicated that 50 percent of Swedes believe that begging should be outlawed.

However of the eight parties in parliament, only the nationalist Sweden Democrats support a begging ban.

Åsa Regnér Sweden's Minister for Children, the Elderly and Gender Equality, has long argued that authorities in Romania should take more responsibility for the migrants' welfare and has been in talks with officials there over how to improve children's and women's rights.