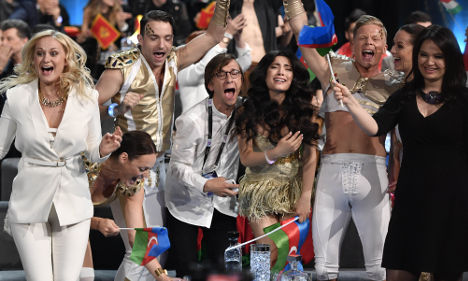 In a night of glitz and glamour, eighteen countries took part in the first semi-final on Tuesday night to decide who should fill the remaining slots available for Saturday's final, with the result decided by a combination of national expert juries and televoting.

Sweden, Germany, France, Italy, Spain and United Kingdom had already been guaranteed their places ahead of the semis.

The finalists who made it through after singing their hearts out at the Globe Arena were: Samra (Azerbaijan), Sergey Lazarev (Russia), Douwe Bob (The Netherlands), Freddie (Hungary), Nina Krajić (Croatia), ZOË (Austria), Iveta Mukuchyan (Armenia), Gabriela Gunčíková (Czech Republic) and Minus One (Cyprus) and Ira Losco (Malta).

And here are our first ten qualifiers! Congrats. #Eurovision pic.twitter.com/y2hC0bk9U2

Those missing out on a place were: Finland, Greece, San Marino, Estonia, Montenegro, Bosnia and Gerzegovina and Iceland.

The second semi-final with the remaining 18 hopefuls takes place on Thursday.

Hosted by last year's Swedish winner, Måns Zelmerlöw and his co-presenter Petra Mede, the grand finale will feature a total of 26 nations. It will be broadcast live from the Globe Arena in Stockholm on Saturday night.

Ahead of the main event, betting shops are already anticipating an arm-wrestling match between Russia and Ukraine, currently torn apart by the conflict that began with Russia's annexation of Crimea in 2014.

The duel could turn fierce as Ukraine's contestant Susana Jamaladinova is set to perform her contentious song '1944', which recounts Stalin's deportation of Crimean Tatars.

Another gamblers' favourite is French-Israeli Amir Haddad, who will represent France with upbeat tune 'J'ai cherché'.

The handsome 31-year-old dental surgeon is trying to charm other nations with an unusual trick in a French performance – singing partly in English.

Should he succeed, he would be the first French performer to win the contest in nearly 40 years.

The Netherlands' entry Douwe Bob has also been scoring high praise on social media, following his semi-final showdown on Tuesday.

Great performance from @Douwe_Bob and the Netherlands. Definitely deserves to finish in the top 5 #NED #Eurovision

Sweden's Frans Jeppson Wall might just also be in with a shot thanks to his track 'If I were Sorry' scoring airplay across Europe in recent weeks and a growing fan base in the UK, where his father is from.