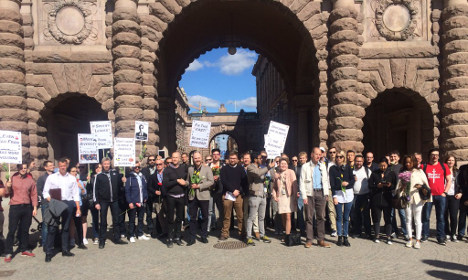 The startup protest outside the Swedish parliament on Wednesday. Photo: Maddy Savage/The Local
The event kicked off at 10am, with Stockholm-based startups gathering outside the Swedish parliament to make their voices heard about the capital's housing crisis.
Justin Drees, an American who has lived in Stockholm for eight years and has just launched a food delivery startup, spoke to The Local's Maddy Savage about his concerns.
“I've really seen that here, even having a Swedish wife, we had trouble finding housing. I've worked at some of the unicorn startups like Klarna and Spotify and seen how there is a lack of tech talent and one of the big hurdles for people coming here is the cost of housing and finding somewhere to live,” he said. Justin Drees, right. Photo: Maddy Savage/The Local
Fewer than 100 people showed up to join the protest, far less than the 1,200 who signed up on Facebook, but its organizer, US entrepreneur Tyler Crowley, told The Local he was “not disappointed” with the turnout.
He said the event had served its purpose by providing a photo opportunity and getting global press attention from media including Bloomberg and Business Insider.
“Swedes are not your typical protesting type so it was anybody's guess who might come.”
Crowley said he was pleased to see several opposition politicians from the Liberal and Moderate parties talking to protesters and added he would be meeting more MPs later in the day.
“I've got invited to join a meeting with ten members of parliament for a discussion which I will brief on afterwards,” he said. Protest organizer Tyler Crowley speaking to The Local. Photo: Maddy Savage/The Local
The protest came off the back of an open letter by Spotify's Swedish founders last month, suggesting that the streaming business could be forced to move its headquarters elsewhere if more beds aren't made available for global tech talent in Stockholm, which is grappling with an accommodation crisis.
“There's an amazing opportunity right now in Stockholm; this is a hot spot. And now a lot of people want to be part of it but they can't, and that's a problem,” Crowley told The Local.
“We need to make it easier for the people who want to join from all over, to join this amazing community.”
He said that the demonstration was designed to allow the city's startup scene to make a statement that they want to stay in Stockholm in a peaceful way.
Demonstrators were encouraged to bring “flowers, chocolates, a smile and a hug” to the event. Others arrived with banners reading “Even San Fransisco has more housing” and “Don't make us move to America, we don't like burgers”.

Property prices in Stockholm have shot up in recent years and a divided rental market means that those without points in the city's queue for price-controlled housing can also struggle to find a home.
While there are some commercial firms that help global workers and Swedes source accommodation, these come with a premium price tag; unlike in many other European cities there are no high-street letting agents in Sweden. Many newcomers to the Swedish capital therefore end up taking short, second-hand contracts at inflated prices advertised via online marketplaces such as Blocket (like Craigslist in the US or the UK's Gumtree).
Crowley argues that the problem is even more acute for foreigners, who often struggle to score even these kinds of homes in the face of rising competition, and may lack the connections to find accommodation through friends and family.
“I have many, many friends who are living in some of the nicest parts of town paying around 7,000 kronor ($858) [because they have rent-controlled first-hand contracts]…I have been offered something for 20,000 kronor ($2450) a month in Kista [a suburb outside of Stockholm].”
Sweden’s current Social Democrat-Green coalition recently promised to set aside 5.5 billion kronor ($665m) for various new housing projects across the country in what Finance Minister Magdalena Andersson described as the “biggest housing political investment in 20 years in Sweden”.
However it remains in favour of maintaining rent controls in order to avoid segregation or forcing long-term residents to leave their homes.

Elizabeth Svantesson, jobs spokesperson for Sweden's opposition Moderate party and one of the politicians who attended the protest to speak to campaigners, told The Local she was also against scrapping Stockholm's queuing system. However she argued that the government should work to limit building regulations in order to increase the pace at which properties are built in the capital and said that city officials should work to improve links with the startup sector.

“First of all we need to build more, but when it comes to these companies it's also important that Stockholm as a city has a good dialogue with the companies so that they have housing.”

She said she did not think startup staff should get prioritized in housing queues but added: “Startups are one of the sectors that is very important for Stockholm and for Sweden (…) So many people are moving to Stockholm because it's a fantastic city, so then we also need much more building and fewer regulations surrounding this building.”

By contrast, Crowley argues he can see the benefits of a completely deregulated market which might see rental prices rise in the city's more exclusive neighbourhoods, in line with similar areas in Paris, London or New York. However he insists he is not trying to promote a “divided Stockholm” and says he wants to leave it to policy makers to come up with a solution.
“I have a lot of respect for Swedish politics and a lot of trust and optimism that the politicians will come to the right conclusions. I just hope they feel a sense of urgency to get their hand on this opportunity that we have right now, before – heaven forbid – one of the big startups leaves,” he said.
The protest was also organized to back Spotify's call for Sweden to allow employees to be given stock options in companies and encourage more spending on tech-related education, especially for women.
Reporting by Maddy Savage, Editing by Emma Löfgren