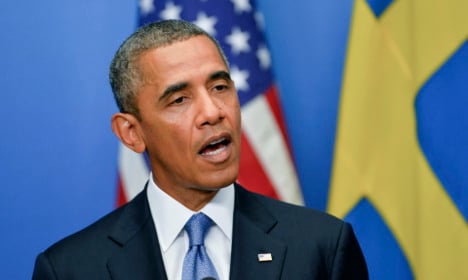 A spokesperson for Swedish Prime Minister Stefan Löfven told The Local on Wednesday that Obama was keen to learn more about the so-called Nordic model, including Scandinavia's welfare policies and recent startup successes.

“It is clear that the administration is interested in the Nordic model’s focus on innovation, sustainable development, social justice and strong welfare,” press spokesman Erik Nises wrote in an email.

“It is virtually unique for five nations to hold joint discussions with the USA, which shows how well Nordic cooperation works, and is also proof that President Obama values the social solutions the Nordic countries have chosen,” he added.

Löfven and his counterparts from Denmark, Norway, Iceland and Finland will meet the US President on Friday. The result of talks will be detailed in a two-hour press conference, while a lunch for the leaders is scheduled to be held on the White House lawn later in the day.

Also on the table at the summit, which comes after a similar meeting when Obama went to Sweden in September 2013, will be the refugee crisis roiling Europe.

“For Sweden, questions related to employment, growth and social equality are particularly important, but also shared work on the climate and creating a global sense of responsibility for the refugee crisis and its causes,” said Löfven's spokesperson.

“Our relationship with the USA is important, and we have never had as much cooperation in as many areas as we have now,” he added.

Sweden is also expected to attempt to push forward negotiations on the proposed Transatlantic Trade and Investment Partnership (TTIP), which would open up the possibility of free trade and investment between the EU and the US.

After the talks are over, Löfven will stay in the US for a few days, where he is due to lay wreaths at the Tomb of the Unknown Soldier and Robert Kennedy’s grave in Arlington Cemetery, as well as take in a baseball match in Washington DC.